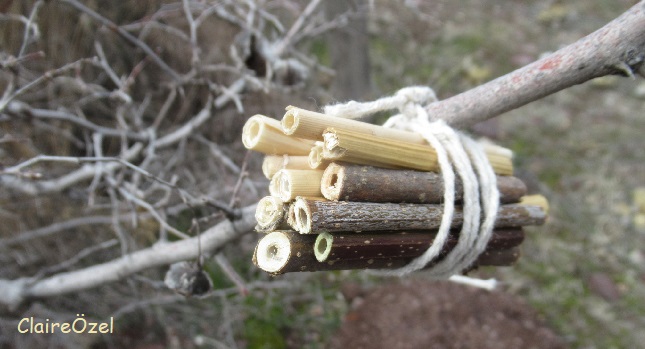 A 3 species bundle: which will the solitary bees and others choose for nesting: Reeds, Erngium or Forsythia?

For two months, 60 hour curfews have forbidden movement between Friday evenings and Monday mornings: "no going out on the street". This weekend we spent it at Güneşköy: no streets around, and 75000 square meters to explore. To prepare an illustrated map of Güneşköy, Derviş needs time to explore the land. We stayed 27 hours - 3 days and 3 nights. On the way, we had to stop off at our neighbours at Çiftlik. Ramazan's daughter Elif finished this online semester with congratulations. I had a bag of goodies to give her; she immediately shared some with her cousins. Berat, full of energy, got his hands of Derviş' camera and started to take 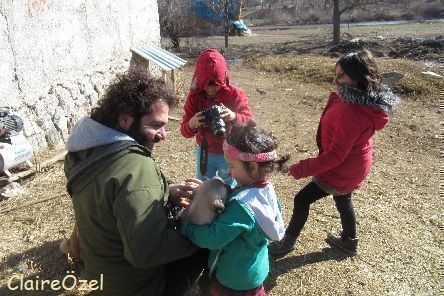 This calf was born at midday, two hours before we called by. A cloth was wrapped over it to make sure it wouldn't catch cold, a cloth. Midwife Seda was cooking, her grandchild visiting for the weekend. a number of lambs are getting stronger on their feet, and bleating more loudly. Two were about to move to Bedesten, a village 10 km away. 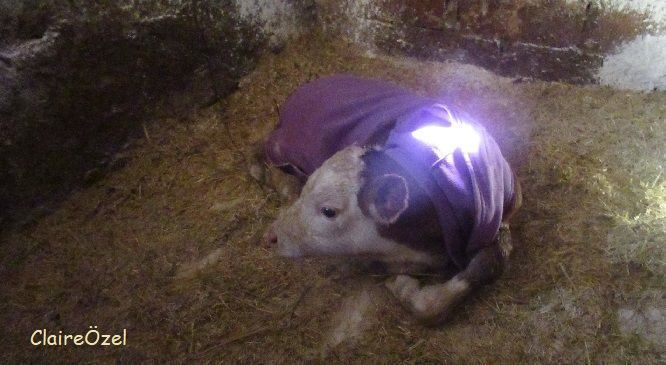 I spent three days showing Derviş round. What a treat, wandering around and stopping to share those small details I've loved over the years. Combining sketches and photos to record key points, we stopped off at the Throne, a natural seat high up near the North-Eastern fence. Too narrow and steep for yoga. How many compost heaps at Güneşköy? 3 on the western terasses, 1 above the Mandale building, 1 in front of the glasshouse, and one next to the Worm Tent. 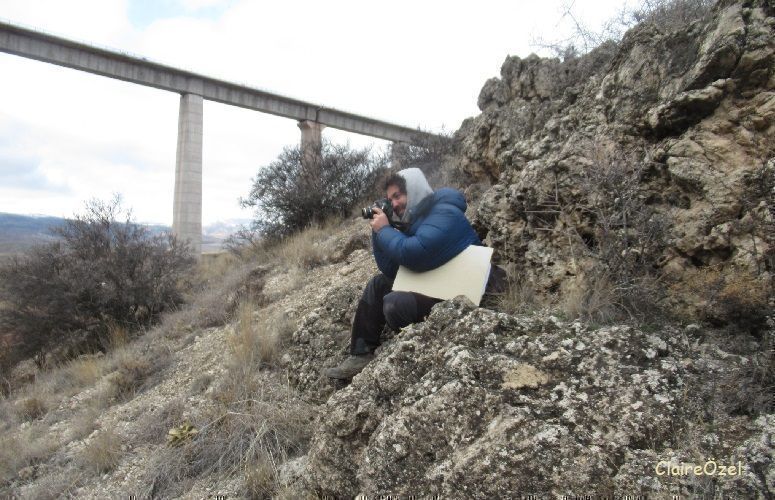 Winter evenings are snug in the large kitchen, with the stove roaring away. Chestnuts are a regular sweet, then one evening we tried a banana - chopped in slices, half wrapped in its skin; eventually it cooks and softens. Delicious! Never play a string instrument too close to a stove. My thinnest mandolin E stings snapped out of tune, one after the other... Moving to the other side of the table, I was eventually able to retune - yes the tuner phone app does work without any mobile reception. The conversation ranged from treasure seekers to wolves in the valley. Derviş checked over his drawings and then dipped into the UNDP Small Grants Program book of past projects: so inspiring. Over the three days, our food was varied, different cooks generating a range of dishes. Spiced Erişte macaroni, a huge pot of lentil and potato soup, even enough for Herkül as we all left for Ankara on Monday - the cold hit the rocket and radish plants, so no green soup for a while. 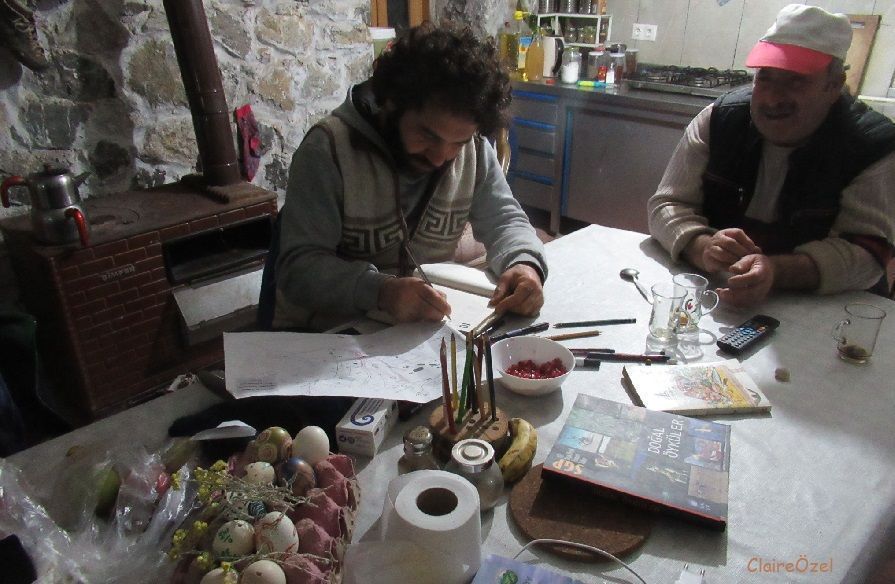 The first night was the coldest, and outside work starts later in the morning. Sowing pepper seeds in the raised planters requires fine soil, seeds, vermicompost, then water. And make sure Hayalet (the cat) doesn't decide to sleep there for some time. Derviş has brought seeds: maize and sponge gourd. 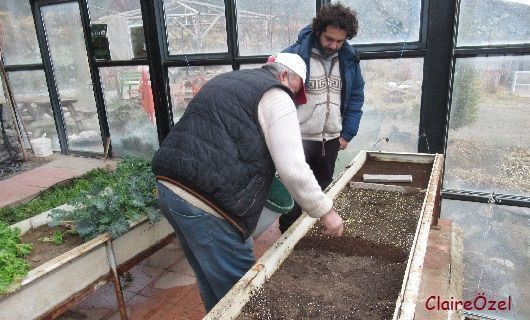 Winter month tasks include opening up the base of trees, removing couch grass and other strong weeks that would strangle the planted trees, limiting space and restricting nutrients. Another job is repairing the fence. Drawn up in November 2003, the 3.5 km fence was intended to prevent cattle, sheep and goats from straying onto the 75000 meters square. We only used wooden posts and plain wire. Over the years, some of the weakened posts have not been strong enough to remain in place, especially those at the south-eastern corner. 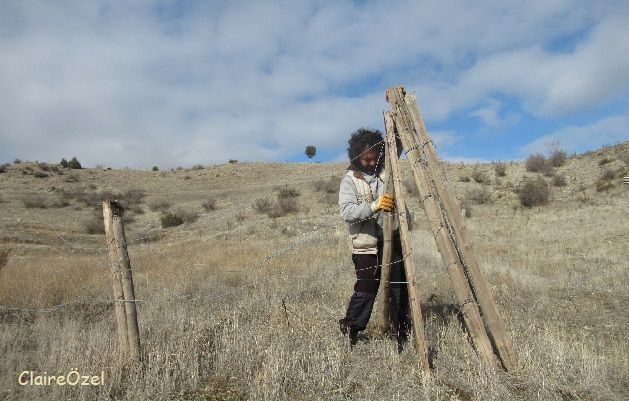 One of the posts put in 18 years ago. The sharpened base has a white patch of mold, and the exosed top is green with moss. In the Black Sea, decomposers would have weakened the wood far more rapidly! 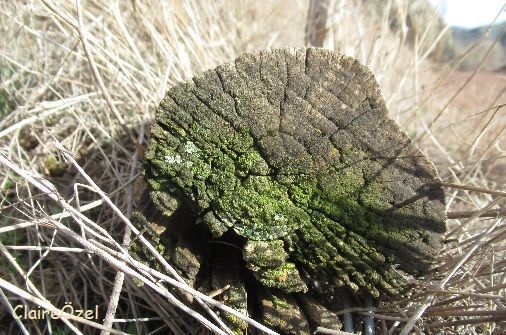 The pine trees we planted four years ago are finally filling our, gradually more able to soften the impact of frost rolling down from the hills above. Ecological developments take time to happen... In the field below, Gundiri wheat is starting to germinate; it's good for flour, bulgur and pasta. We still have time to remove couch grass roots from the soil - as the damp soil freezes in the cutting wind, the cold bites my fingers. The next day I found a dried grape hyacinth that still had a fair number of seeds. I buried them in pairs behind mulleins on the "empty" slope above the pines. Too late for this year... Çamların üstündeki yamaçta kuru bir Musacari comosum?u buldum. Hala sakladığı tohumlarını ikişer gömdüm o yamacın sığır kuyrukların arkasına. 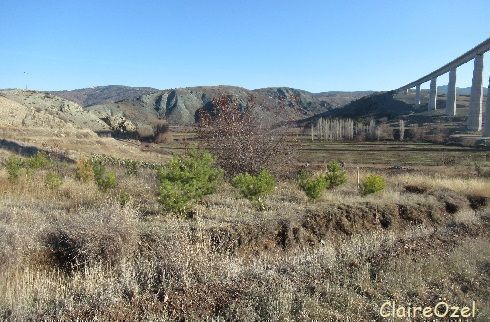 Above us, a field that has been ploughed for many years on state land is already showing the green lines where the seeds were sown, earlier than our wheat. 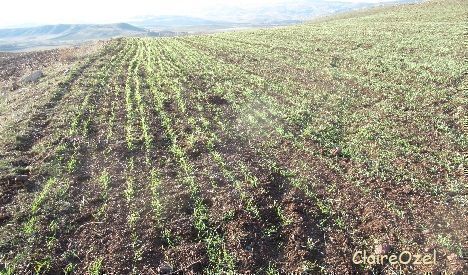 The shape of the Canyon is evolving. Clearly visible in the falling snow are the broader shallower sides. Vertical slopes from the past have been fritted away over the years. The bottom is rising as less water flows down the bed that the water has cut itself over the years. Friday night's steady rain didn't bring any soil or stones onto plants that grew last summer. The large blue Wishing Stone is lower to climb on. Some sides are now easily climbed: our Canyon route has changed. The northern limit is now quite blocked with a large dead Jerusalem Thorn bush. If we pile material behind it, how much water might be held back? So long as the rains are steady, more water should soak into the soil without the strength to bring down soil, stones and rocks... 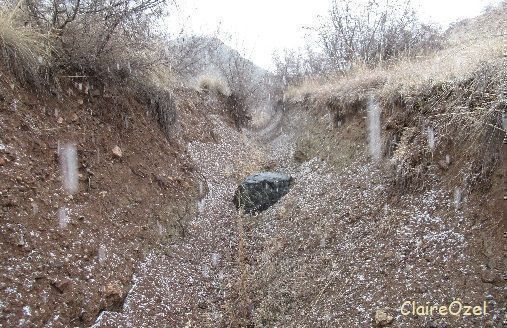 In the dampest season, mushrooms do appear. Most of the year, they show no sign of life, the vegetative mycelium unseen in the soil, as it connects plant roots and decomposes dead materials. This is one of the larger mushrooms; others are much smaller and difficult to identify. During a mycological foray years ago, a British mycologist told me I'd found "an LBM" - a Little Brown Mushroom: when small their features are insufficiently clear to distinguish one from another. Inner Anatolia with its dry climate will not be famous for wild mushrooms . 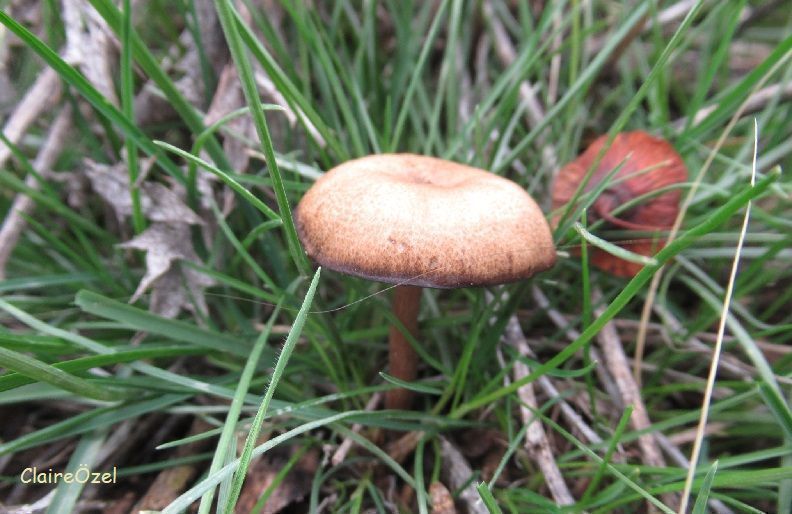 A caterpillar in January? We found two, in different parts of the land. Does being so "fluffy" help it lose less heat? And is it clack to better hide in the darker months, in moist dark soils? What will this grow into?

The shepherd's path taken morning and evening over decades clearly divides two different flora systems. Why did the sheep follow this particular path? 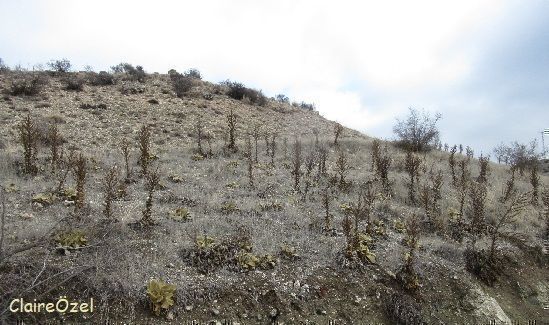 The watering pond is at its lowest level yet: the reeds' roots are in thick mud. A couple of times Celal has filled the pond to avoid stagnancy. We should clean it out before the season starts, and remove plastic that dropped in during the viaduct construction. 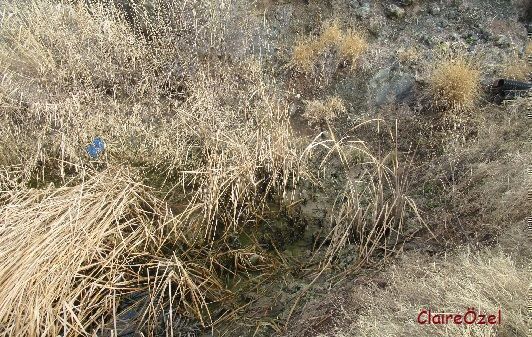 The intrinsic urge to ensure the next generation will have a chance leads creatures to set up nests - whatever the environment... Though no rubbish is dropping from the viaduct, I still collect large amounts as I walk the land. Above us, the pigeon nests have been safe from predators until now - long-legged buzzards (Bufeo rufinus) are now back in the air, having avoided the area during the construction.

Above the pond, the top of the large rock has broken seeds and shells: which animal has left them? 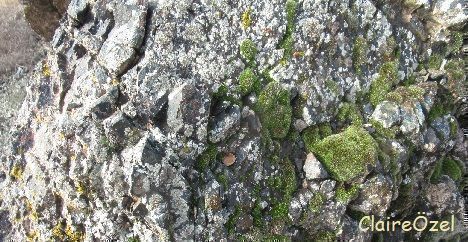 The western slope may seem to some as "empty", without life - until this season: as well as the many Colchicum "naked ladies" humbly flowering at ground level (since December), long thin green leaves indicate where other bulbs are preparing to flower. I have started to clear around the leaves and mark the place with larger pebbles. Spot one, and others show up nearby. There are two quite clearly different species, to be followed in the coming weeks. 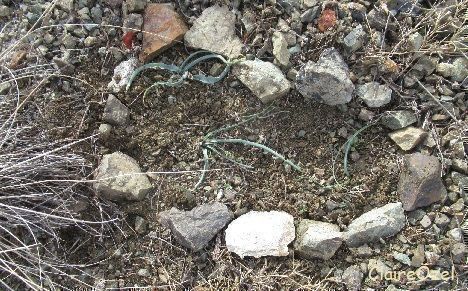 3 nights at Güneşköy gave me time to look into some boxes: a mixture of seeds, collected from wild plants last summer. So many shapes, in a close range of yellows and beiges. This year we'll make more Seed Balls. 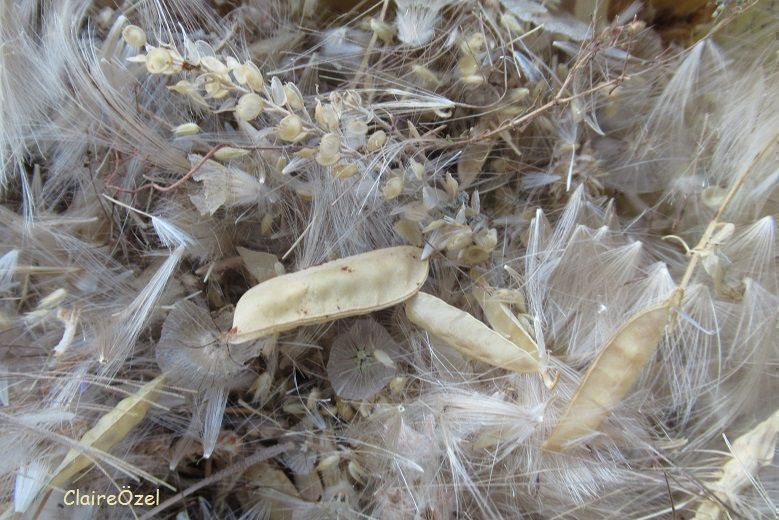 Feeding Life
Other Blogs
Blog
We use cookies on our website to support technical features that enhance the user experience. For detailed information click here.
Accept