Alp Pir was in Ankara about his work at Köyceyiz.  He told us about the work of Ernst Götschn, and his Syntropic Agriculture https://believe.earth/en/ernst-gotsch-the-creator-of-the-real-green-revolution/. The film Life in Syntropy film is available in many languages, including one with Turkish subtitles.    By working with nature, not against it, we can help poor land to grow stronger and richer.  Bare soil does not retain carbon, never leave it bare, though it is useful for drawing on.  Alp was showing how to plant local seeds with cuttings of fast growing trees: 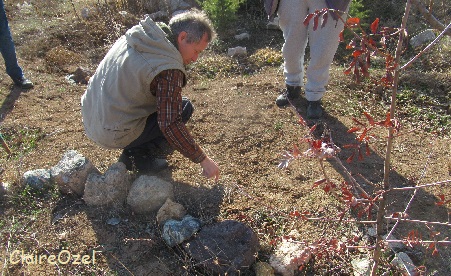 We walked up next to the canyon towards to water source. In the dry highlands of Central Anatolia, few water sources flow all year round, many only flow after rains, often sudden powerful rushes of water that has no time to sink into the soil. Over thousands of years, water has cut ways through the land. The strength of flow carries finer particles and can lift even rocks, only getting them rest when the water loses momentum. 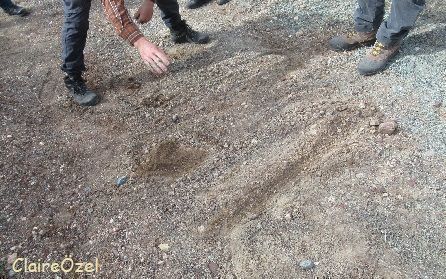 How to slow down the impact of flash floods? Planting cuttings of fast growing trees and bushes in the bed carved by the waters. Evergreens would be best, but none under local conditions. Willow and poplars; then once they have taken, other species can be planted around them .. Ailantus does grow well in the valley, but can too easily take over unless we could be sure of pruning back very regularly. "Although terrasses are not not natural, as a last resort they can he used to slow the impact of flash flood waters" (says Alp): the soil soaks up the water and prevents the loss of sediment washed down from the hills above. Higher up the dry water bed, "harım" barriers can be built at the narrowest points to slow down flow.

When we returned to the glasshouse, Alp sat down to explain ... with many illustrations. 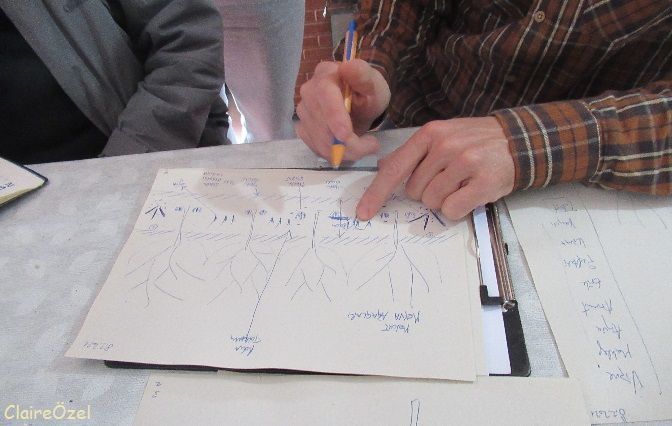 Alp showed us the film they have made about their work at Köyceğiz, to be presented (online, safe COVID distance) at a (minimum eco-footprint) European gathering in June 2021. The computer is another opportunity to get the message across! "My purpose is to nourish life so that all life can be nourished. 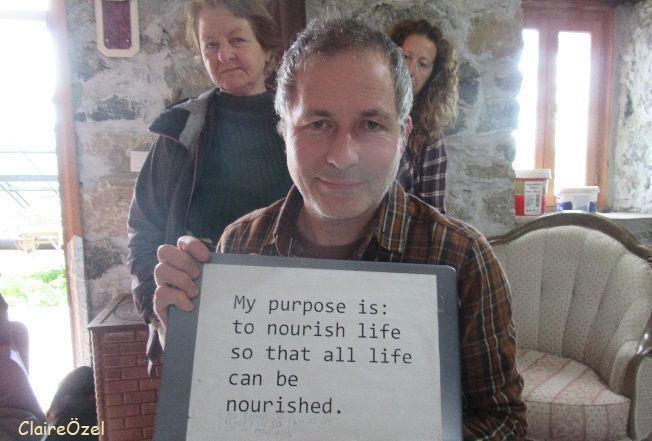 Before they left to drive back to the Mediterranean, they unloaded two crates of citrus fruits: tangerines, lemons and grapefruit, carefully packed in strong boxes, with a sprig of rosemary, geranium and tangerine leaves. Even the label has a message: "Feed life". 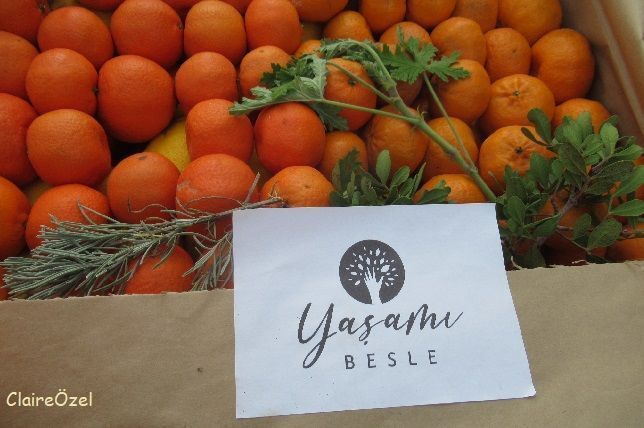 Once the day visitors left, I went to the field where Gundiri wheat leaves are starting to push up, and gathered more couch grass - piling up the dry parts for burning while filling a back with those moist roots ready to expand in another wave of colonisation. 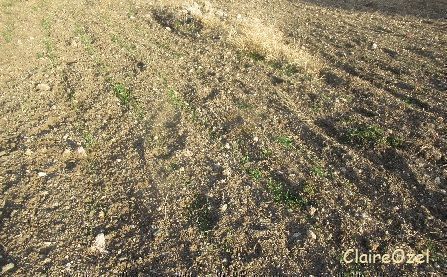 ...walking up beyond our northern border, I stepped onto the dry lifeless slope - just stones and a few rocks. A geological slag heap, very slippy to walk on. 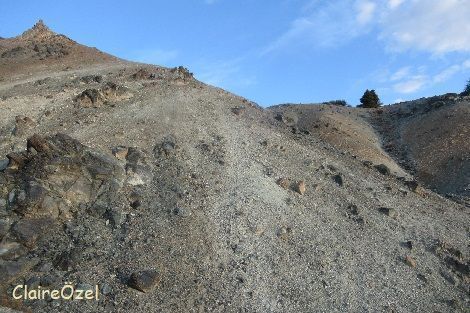 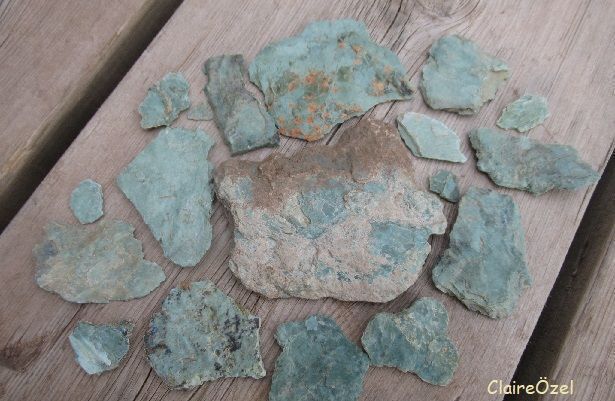 What if couch grass was planted during the cold damp months? In June 2016, I had tried burying roots of this ubiquitous farmer's nightmare in the same place, but it had been too dry even for Elymus repens. 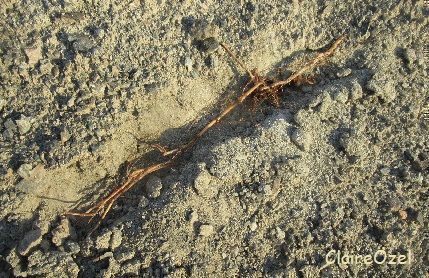 February evenings should be cold. Still Celal lit the stove: time to cook another banana. It would be delicious with thick yogurt! It had never occured to me that cooked bananas would have a strong smell! 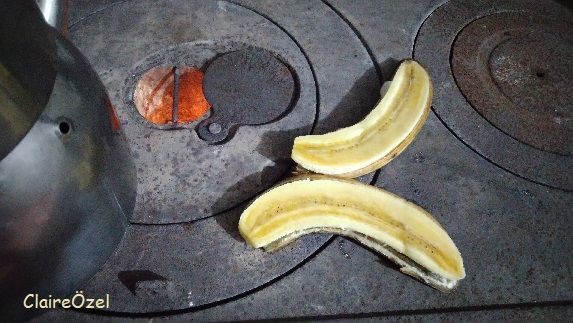 This wooden post, exposed to the roasting summer heat and frozen winters for 17 years, is capped with liken: signs of clean air as these slow growing organisms are nourished through the air. Wednesday morning is cold! Still I saw my first lizard. How does this cold blooded creature find energy to dart about, looking for food? Yesterday, even in the evening, I never needed the polar fleece. Today the thermometer will only get to 12C, 5 degrees less than yesterday, but still 5 degrees more than February's average maximum. 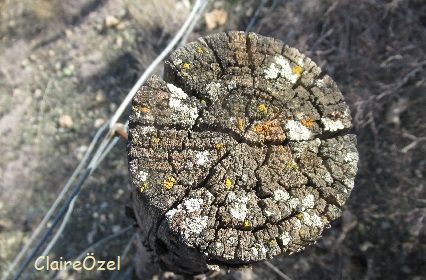 Colchicum / Naked Ladies have been flowering since December. The pale pink flowers have been popping up between stones on undisturbed rocky slopes, near the edges of spiny Jerusalem thorn bushes. The leaves are so small and thin, they are barely noticeable; are they the main source of photosynthesis? How do the bulbs renew their reserves? As the weather warms up, they are reaching the end of this year's season. Look carefully at this photo: between the flowers, among the stones are orange patches: another decomposing plastic bag - noticed too late to remove it as a single piece, it crumbles when I touch it... This so called "eco-friendly plastic" will soon not longer be visible to the naked eye, but the microscopic particles will remain in nature. 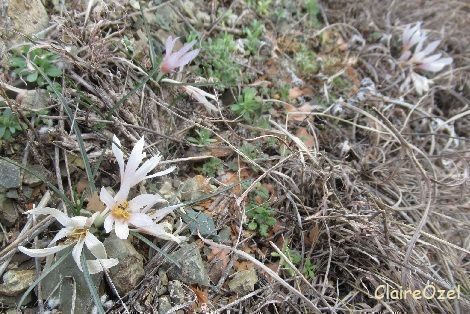 The first flowers of the year get their energy from reserves saved last year in their bulbs. At Güneşköy, we have both members of the Liliacea and Iridaceae families. On the western slope, patches of thick bunches of thin leaves of soon-to-flower clusters of grape hyacinths (Muscari) are in places so many that I can't step without discovering more. Grass is also starting to push up: same colour and similar shape, so need to check well before marking the location of bulbs. 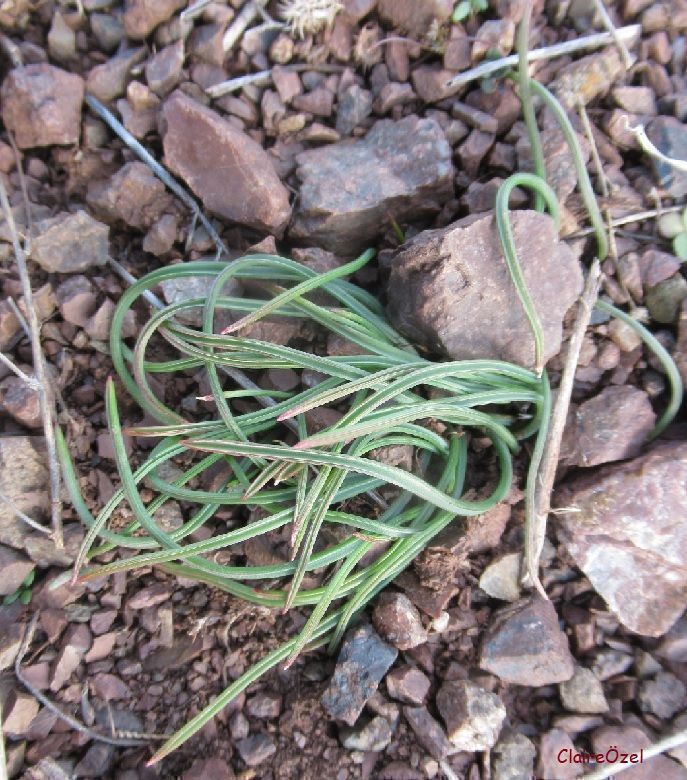 Other leaves are fewer but broader: Gagea villosa, or hairy star of Bethlehem, is another Liliaceae; I spotted a first yellow bud. Since retiring in November, I have been able to monitor more closely the seasonal changes on the land. I also found a first Lamium deadnettle, never previously seen until March - I'm now recording such unseasonal flowering with the date on https://guneskoyflora.wordpress.com/2-february-subat/ 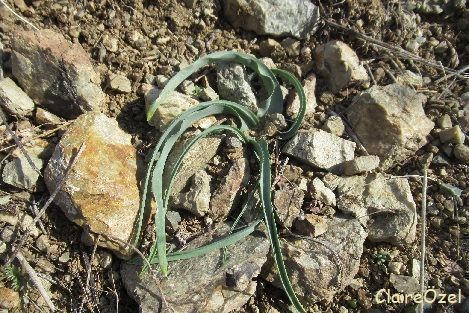 Before returning to Ankara, I called to collect 5 litres of the Çiftlik cows' milk (I've now scaled up kefir production from a litre at a time). Elif is on holiday (2 weeks rest between two 16-week semesters; to short for many) and is helping out: off with her father and grandmother to the fields, talking of when she too might drive the tractor. 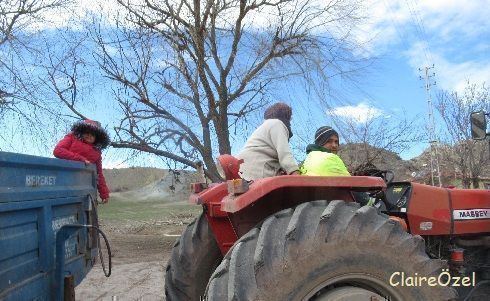 Wednesday, by midday the wind was strong: be careful to close the greenhouse doors. A gust of wind could shatter the glass, as has happened to a window before. 90 meters above the wind howls between the viaduct railings; a sound effect to be recorded some day. The kitchen's calm is rattled as the lid of the stove pipe spins faster; not a sound to sleep with!

72 hours Nature Confined
Other Blogs
Blog
We use cookies on our website to support technical features that enhance the user experience. For detailed information click here.
Accept