Dr Şenil Ünlü had come to Güneşköy as a student.  Now she is bringing her own students, from Kırıkkale University (the nearest university to Güneşköy). A week ago I'd talked with the students through Zoom; I'd talked about what Güneşköy was, how it was set up, etc.  Today it was sunny if a bit cold when 2 buses brought 60 2nd year students of pre-school education (they have another 5 semesters so study and integrate outdoor learning into their approaches).  No time to loose, they had to be back by 12.30 for their next class! When they just about fitted into our strawbale building, we randomly split them into groups of 6, gave them a plain map and sent them on their way to discover whatever they could in 20 minutes. What Şenil and I had planned was already off track: so many things to talk about; Plan B developed sspontaneously as we deferred various stages to later.

The 2 bus loads brought 60 second year students of the "Pre-School Education Department". They found so much, and had so many questions... Natural and man-made, a rotting pumpkin (why?), black hoses (what for?), orange flowers (in fact the fruit of Jerusalem thorn), a bird's nest at the bottom of one of the 90m tall pillars (whose?), glass bottles (what for?), a tiny seedling growing in a rotting chestnut (how?), a live grass hopper (still?), multicoloured stones (what?)... so many questions raised by these nature detectives. So much that can be done. The dome is now bare (who, why, when, where...?) 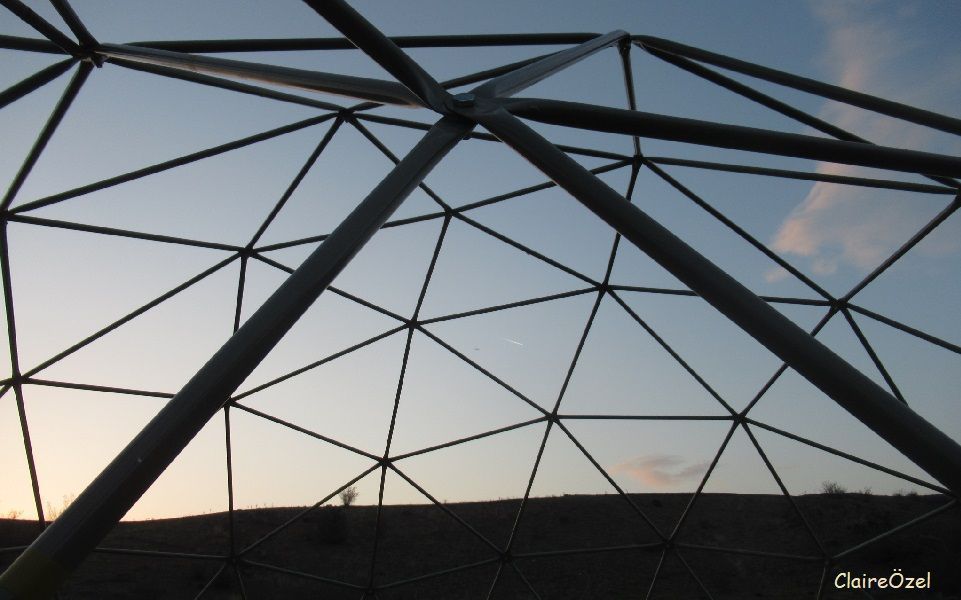 When I came on Sunday, I dropped by to see Seda "Make sure you come tonight!". Four generations of girls had great fun, young Ecrin entertaining us, getting fun and taste from the hundreds of pomegranate seeds. The room heats up well with the wood-burning stove roaring away until we all went to bed. 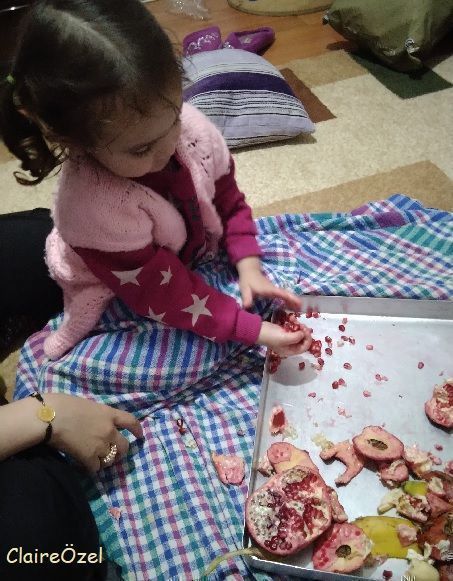 Monday morning: Seda got up early to make breakfast, feeding me well so that I would be ready for the 60 students. I had to clear ice from the windscreen before driving over to Güneşköy, where Herkül was waiting for his breakfast, special chicken and bread prepared by Celal before he left yesterday: his son is returning from his 6 month long military service, and the family are preparing a feast. Yesterday Sunday, we'd had a feast at Güneşköy: barbequed fish, fresh salad, pickles and oyster mushrooms, the French "pate de coign", quince sweet. İnci and I made 3 jars of quince jam - this year is a quince year, plenty on the trees! We also chopped up enough for more Pate de Coign. For 28 hours, there was insufficient eelctricity for any water (to the dismay of Doğuş and the other company, that come to fill their tankers). However, the lights were working, and so did the blender!

Not much movement in December... until you keep your eyes open. This tiny centipede was under a stone. Ants are active with a minimum level of warmth; we also saw a slow cricket, a faded ladybird, and of course Herkül.

While harvesting wild reddish leaves I noticed these yellow-green butterflies, more resilient to the winter conditions that most. 4 year-old Cihan had a good question when I showed him my specimens: "If spiders poison their prey before they eat it, why are they not affected by the poison?". Come again, let's see what we can find together! Most of our fields have been harvested; Şevki came to plough several of them, especially the area above the Mandala building, now a rich dark brown. 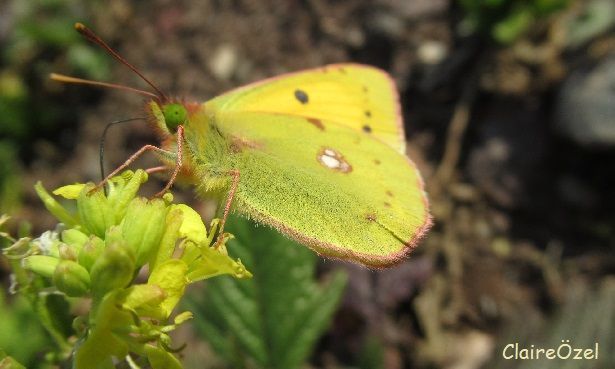 This barest time of year best shows up the plants that grew from seeds that I sowed in February on the freshly landscaped slopes under the viaduct Today, I sowed Mahlep cherries, those tough trees that give tiny bitterish cherries.

The magic of winter landscapes. The metal post of the electricity transformer used to contrast sharply with the outlines of the hills; now it is drawfed by the majestic profile of the viaduct. The diminutive pylon has hosted a bird's nest for over ten years; now the viaduct's turn to provide shelter for young birds. Last Sunday Nezir passed away; for many years he was a regular visitor from the village. In July 2010, he taught us about different ways to make a tree graft; in March 20157 he joined us that day we transferred 80 fruit trees to their new locations away from the construction area. Nezir showed us how to not just prune the branches but also the roots... Now the land will miss your wealth of traditional knowledge; may you rest in peace.