With the Farmer's Document, the formal letter with the names of those connected with Güneşköy, and my identity card ready on the passenger seat - cars are mainly "driver only" under Covid regulations - I drive up to the check point where I'd been turned round at the end of April.  To my dismay the fork in the road only had the sign posts, not even a car with dozing officers.  However, had I come without documentation, fate could have meant another regection.  Certainly not a risk I'd want to take! We have better uses for our energy.  In the last light of the day the shadow of the viaduct is intriguing.

Time for the pioneer Elder tree to have some shade. The decorative elder is in flower, still not enough for making cordial. Flower photography is challenging in the wind. Some flowers are at the end of their season; jasmin, Cardari draba, Over 53 species identified. 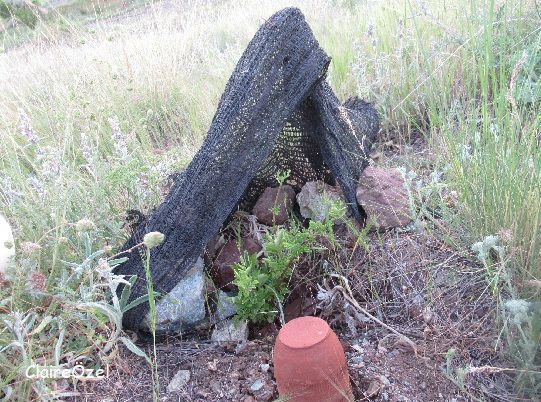 Wİth no work on the viaduct, the arrival of a large digger on the back of a long drug might not have attracted attention until the truck stopped, the huge digger began to growl deeply as it clambered down the ramp onto the road... and turns up the hill. Has it come to contribute to our landscaping? As it beetles up the red-brown dirt of the service track, the truck diver starts up the engine.

The Colorado beetle season has started. The bright yellow eggs are so regularly packed. Whey are they so brightly yellow? 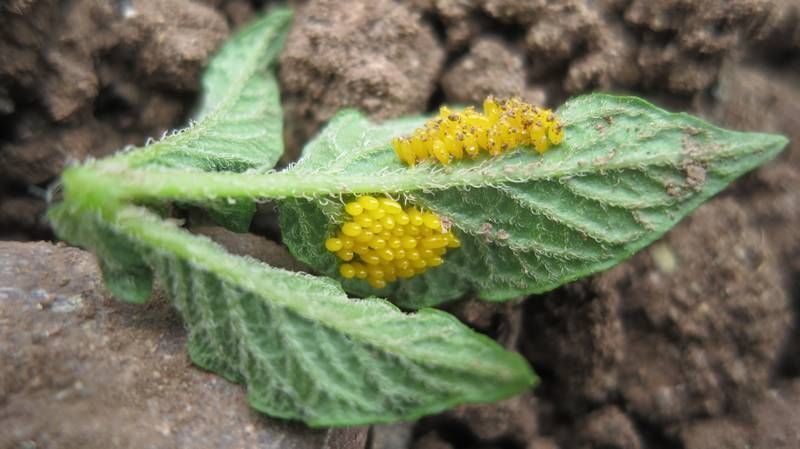 The largest potato field so far. While checking 4 rows for striped adults and yellow patches of eggs, I can't resist digging out weeds. 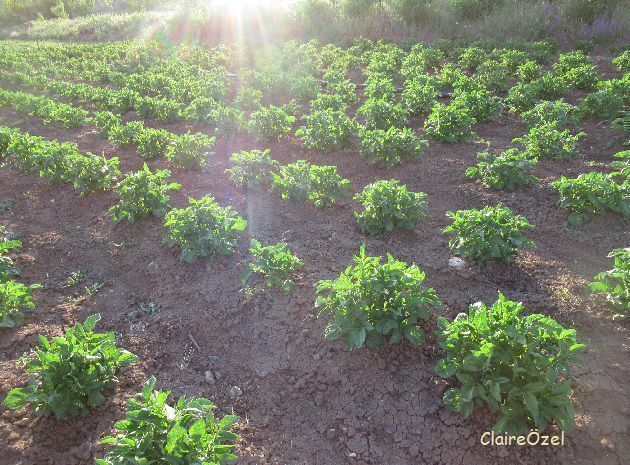 After the evening meal and Celal goes to bed, I take my mandolin out into the dark to KeşPoint: not looking at where fingers fall on the frets. It's only by sound or by feel.

Having played in the dark till after midnight, it was only 5.15 when a gentle pitter patter brought me to, softer or harder... the sound of rain on the glass of the greenhouse The fading of the night's darkness, as light seeps in like water soaking shapes back into perpective, with red the first distinguishable colour is magic, the start to yet another day with its treasures and challenges. By the time we've had breakfast the rain has set in, solid and drumming heavily on the glass. 6-9, three full hours. Celal sets to the critical task of pruning tomatoes as they climb up their strings; Merdan weeds the farthest corner of the lower bed. I set about making more tree name blocks. I set them out on the floor and squat down; when the acrylic pen soon runs out, so I look for alternatives. The Corona challenge has developed resourcefulness. A tub of white paint, Sena's brushes... Not the best, try a finer one. Some turps to thin the paint. And sitting at a table is best! Certainly not as easy as writing with the pen, this longer method gives a much better product! Strong winds meant Celal had closed the rooftop windows. Once the sun came out, I looked above to the stressed chirping of sparrows. those inside couldn't go out, and others were trying to come in via their regular way. 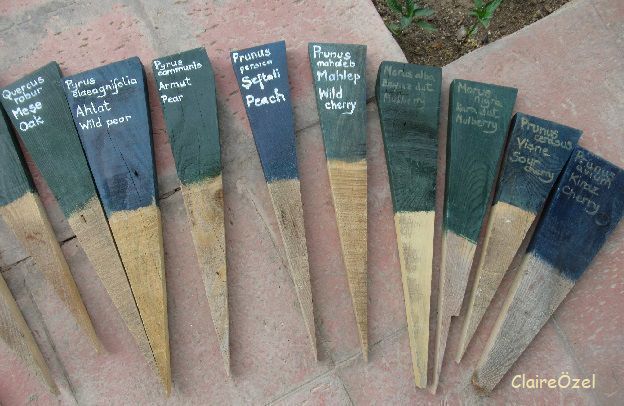 The watering pond has not been cleaned for ages. Bright green with floating algae, and thick with rushes and reeds, it was littered with a range to items: construction waste, plastic bottles, bags that had contained various products (coal? this one had blown in from far). Alone, I set out to investigate. access was easiest from the north. From a single position, I raked in two large bags of rubbish, a pile of algae, and was able to pull in number of reeds that were not yet anchored into the mud. Their under-water root network allows them so network as they establish new clusters. 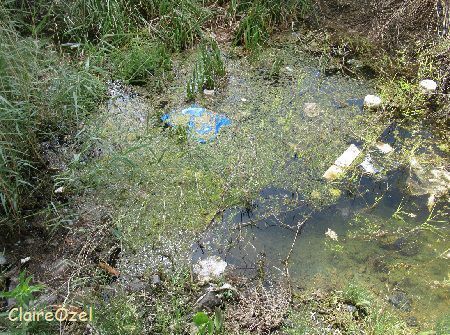 After 10 weeks of Corona seclusion, it's time to rediscover Güneşköy. As an old compost heap is biodegrading, a larger stronger one is rising 5 meters away. The hole for the new compost toilets awaits the cabins themselves. 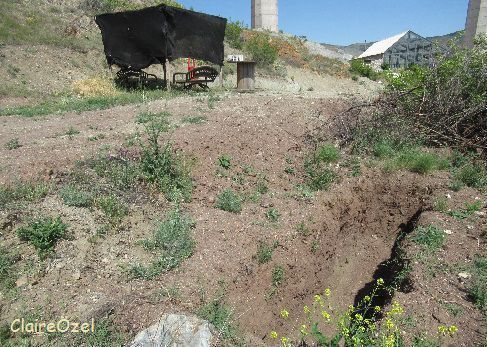 After a relatively cool winter, excess hazelnut shells have become mulch. Our own winter consumption has provided mulch for 4 trees 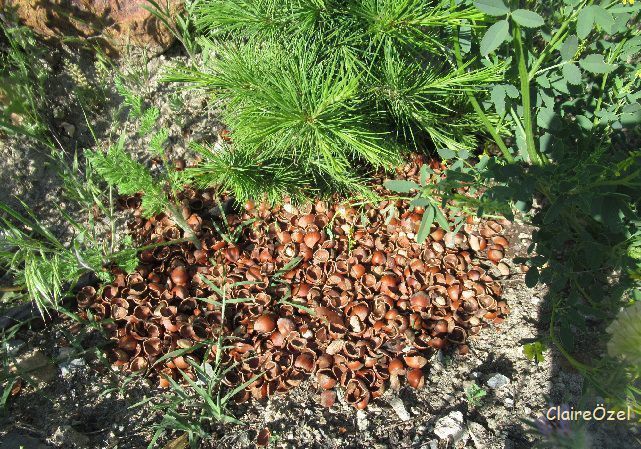 Aloe veras are happyily growing in the greenhouse. The first has now flowered. 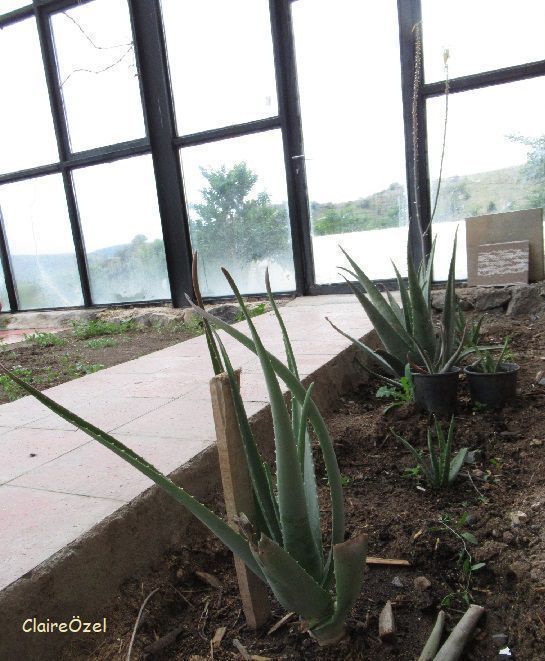 Back to normal After 65 Corona days
Other Blogs
Blog
We use cookies on our website to support technical features that enhance the user experience. For detailed information click here.
Accept