On the slope up from the beaten earth road towards the lowest terrace, some years ago an Ailantus "Tree of Heaven" (stinking tree, in Turkish) took root.  With its rust coloured swirls of seeds, it is now at the centre of a thicket of a dozen strong trunks reaching upwards.  In the last couple of years, I've started noticing seedlings appear on the lowest terrace (10 000 tons of alluvial soil were dumped on our land when the foundations for the 13th and 14th pillars were being excavated in 2016).

Last visit I explored the root of a 6cm short seedling: over 20cm deep, and still more in the soil.  This time I noticed little seedlings new to each other, in a row.  Might they be connected? I started digging... In the first few centimeters, each had a root that went down straight, until lower down they all were found to emerge from a single woody root. This did have an elbow, where it had been cut a while ago.  I dug down as far as I could with my pen knife, and left an unknown length of root continuing deeper below.  Thsi tree certainly challenges us, and landscapes humans had been creating.

Tuğrul Körüklü, botanist at Ankara University Herbarium talked about how this invasive species has been taking over these last decades.  From his window, we could see the tree tops characteristically reddened with seeds, millions of them.  Below, nearer the ground an oleaster (Elaeagnus angustifolia, one of the hardy trees characteristic of Central Anatolian steppes), is sourounded by the brighter green of the the tall Ailantust trees now swamping it out of light.   On the ground floor of the building, some of these "Trees of Heaven" were springing out of the concrete, undermining the building's foundation.

I've been asking many how to hold back the invasion.  Tuğrul says it is a matter of chopping back the plants, each time going as deep as possible to cut out as much root as possible.  Eventually, without leaves and chlorophyl, the roots should give up.  So much to be done!

Our weekly vegetable packets now have tomatoes! First we weigh the entire crop, then work out how much each should get: weigh that in a standard pot (3kg yogurt pots are very handy!). With effective labour division the work is quickly done. Celal fills the pots, and Eyüp and I take them to tip them into their bags. 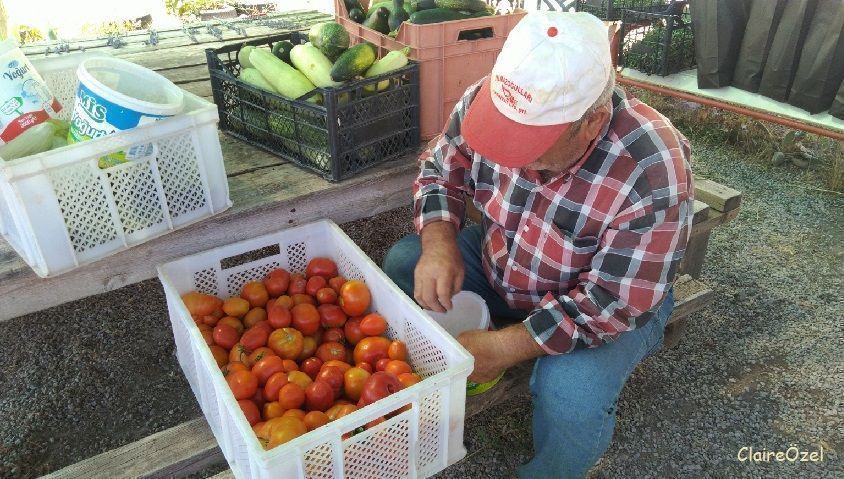 When the best courgettes are distributed, we chop those remaining so they can be dried (those with large seeds have gone too far. The worms have so many, so they now go on the compost heap). During Eid, I made my first Cougette Crisps; verdict "Too salty!". This second trial is more complex: with/ without salt, with/ without pepper flakes. In the roasting sun, they will dry in a few days - to be tested next visit. 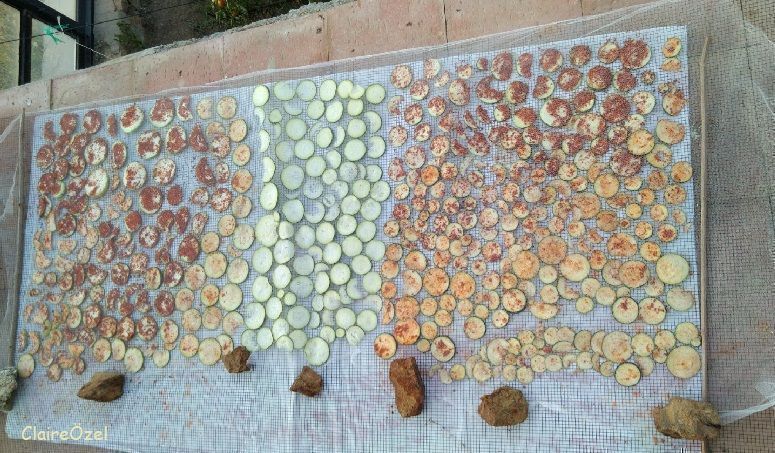 When small flies nip, they make you jump. This one would take quite a chunk of flesh... I'm not volunteering to try. It was too well perched to any attempt to be made to catch it... 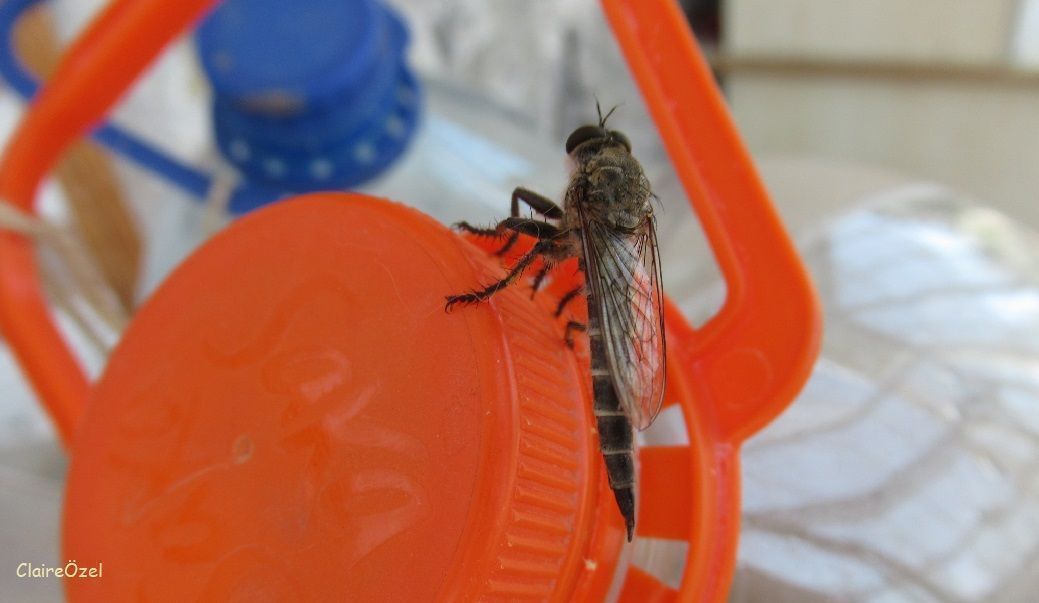 Some insects are rarely seen. When I arrived 7am, this one was waiting for me at my door, unnoticed by Hayalet the cat. This hymenopteran has an even more pronounced thin waist than related species such as ants and wasps. This might have inspired 19th century fashion designers, with their tightlacing to achieve ever narrower waists. 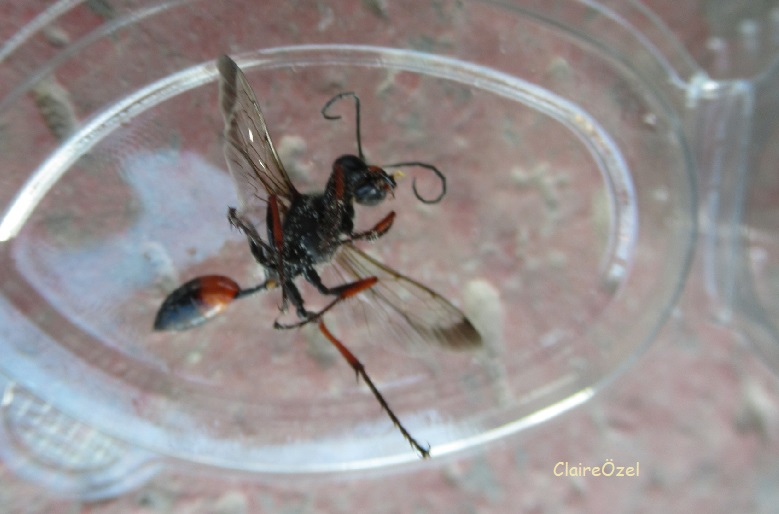 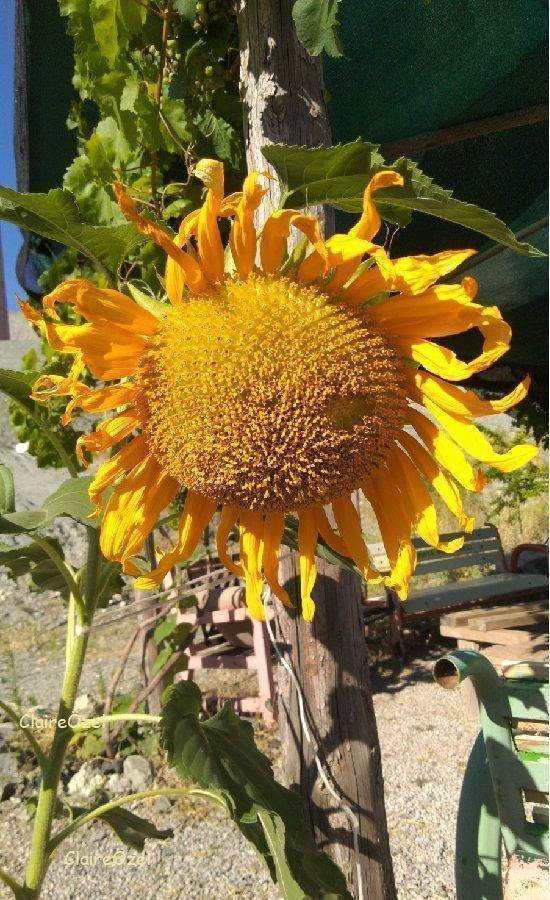 32 child focused hours Eid duty
Other Blogs
Blog
We use cookies on our website to support technical features that enhance the user experience. For detailed information click here.
Accept