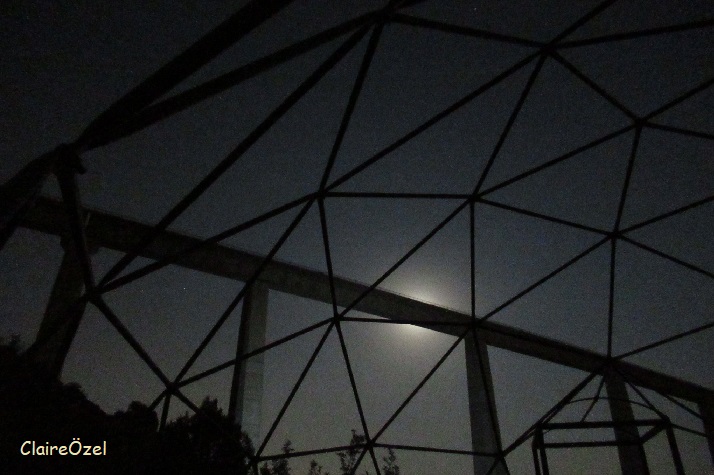 3 objects in alignment : the 4.5 billion year old waning moon tonight rising at 11 pm; the train viaduct track (completed in 2019) and the geodesic dome (assembled March 2021) taking at 3200 ISO.  Soon this view will vanish, when the dome is covered, to become a shelter.

36 degrees Celcius in the day, the temperature now drops when the sun sets. By midnight, few crickets are chirping.  A dog barks in the dark, and a lone motor whirs away near the village.  Not a harvester; this year has been too dry for cereal crops to even grow.  This one is making silage, fodder for winter months.

A film crew from İstanbul had found out about Güneşköy's glass house online. Mustafa followed up his interest, asking Çetin Göksu for his book about its plans and construction. Then they drove all the way to see for themselves: how interest can motivate people! When it is finished, we look forward to seeing your film. It is always good to see something from someone else's view point. One of the crew, Muhammet, had much interesting information. Wind turbines are known to be dangerous to birds, but now the impact of turbine noise is being shown to deter insects in a radius around the turbine. Soil without invertebrates is no longer alive. 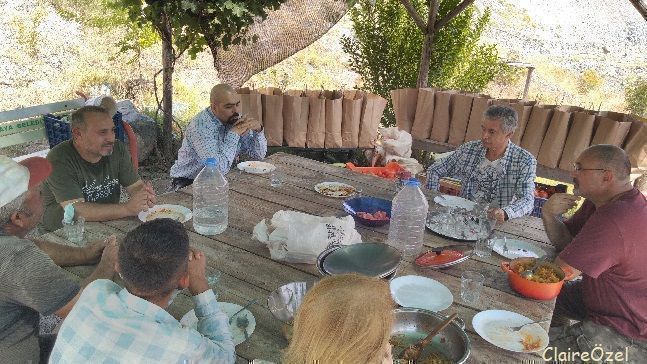 This photo may seem familiar, but not quite. Any guesses? On the way up through the forest and over the top towards Kırıkkale, Theresa called me: in the very slow queue at the border post waiting to leave Turkey, and enter Bulgaria on their way home to Austria. Our last opportunitiy to talk this year on her Turkish number. As we chatted, I noticed this view in my car mirror. An inverted image does feel odd... 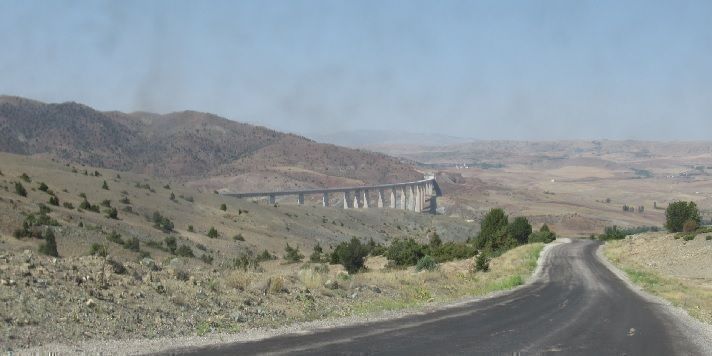 That beautifully winding gentle road through Bedesten brings tranquility whatever the weather. As today's fleecy cumulus nimbus clouds drift across the blue sky their shadows highlight the landscape, temporarily drawing attention to different features. The dark soil of newly ploughed fields stand out against the golden yellow of dry grasses of untouched areas. 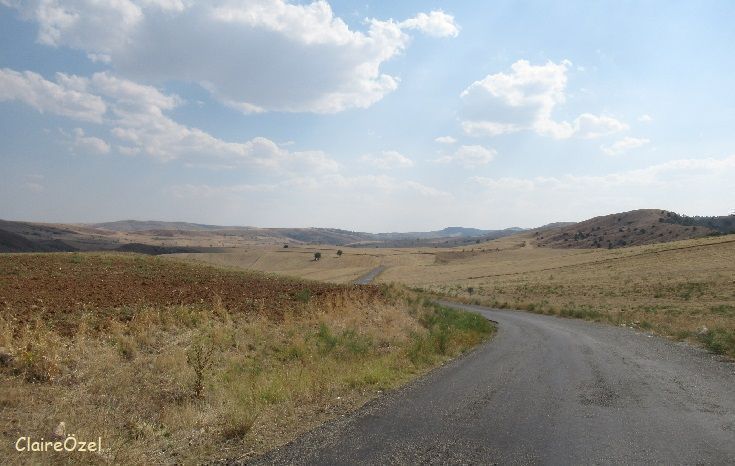 A corner of Şeref Usta's workshop. On the wall below the picture of Ataturk is one of his quotes: The defence of a nation starts with protecting its children. In the front are one of Şeref's new designs: a wooden tractor. It also has a trailer. 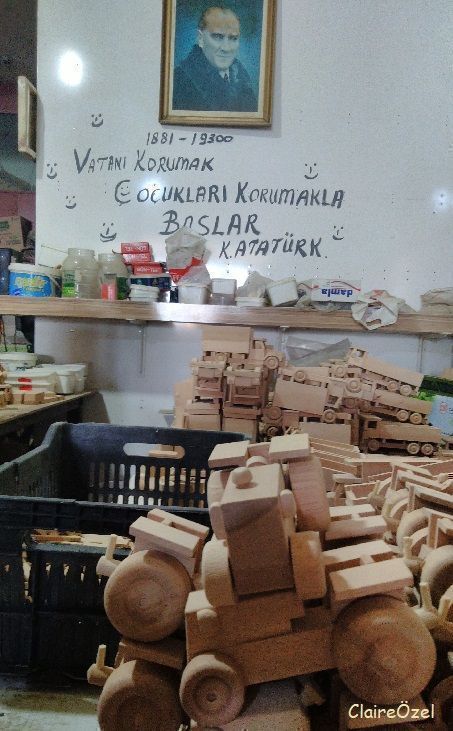 Şeref has developed so many different models over the years. Someone motivated can come up with much, as long as they are not blocked. Şeref, in 24 years your energy just carries on flowing. Not all plans have come to fruition; I hope your newest idea finds the right place to take root! Each time, I meet different people working with you, such as a Russian speaking Lebanese who might one day come to Güneşköy. Today, Şeref's years of experience, creating wooden toys for Turkish children, meant you have given me vital tips to introduce Şahin Gözü. What an unrecognised expert! 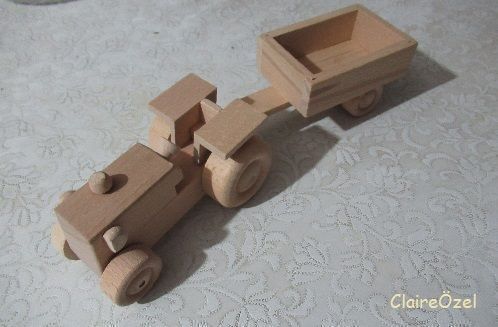 Why did this dragonfly keep settling on the tip of spiny Jerusalem thorn? These most primitive of the Odonata, with wings that remain open, at 90 degrees to its body, have been flying around for 300 million years. Around the pond are damselflies, more evolved with wings that fold alongside their thin body. It took 50 million years to develop this new model - unlike new mobile models that appear in months. Compared to the 250 million years damselflies have been around, Homo sapiens' 200 000 years are only a fifth of a millon years... 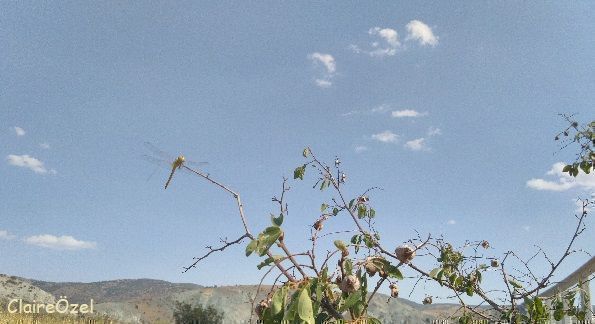 In the evening as I walked up towards the greenhouse, the sound of the sheep bells drew my eyes to the crest of the hill. The dark profile of the shepherd sat on a rock with a number of his flock behind him stood out against the peach coloured rays of the setting sun.

In the darkness, a young frog found its way into the green house. To take it safely to the pond, I needed to catch it without touching it: a glass on top, then carefully slip a piece of card underneath it. There's only one frog under this glass: the physics of light refraction show it as two... 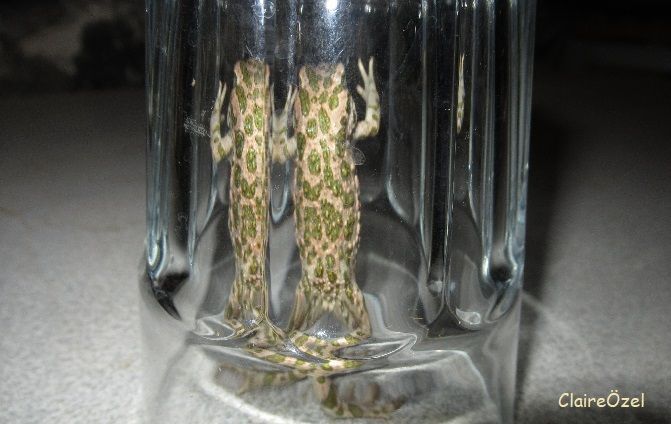 Kale seedlings growing into their characteristic shape, in the large planter. 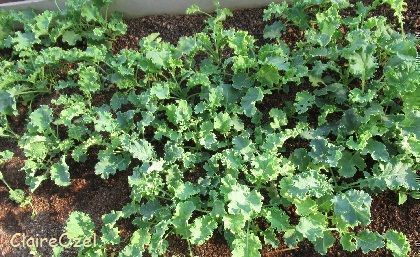 Courgette crisp production is picking up. By 8am I had dipped each of these fine slices in a salt/pepper flakes mix and laid them on the metal grill, covered with the net to keep off birds and other interested creatures. After a 36 degree day, they were crisp dry by 5pm and ready to gather. Sarah! Happy birthday... if only I could send you some! 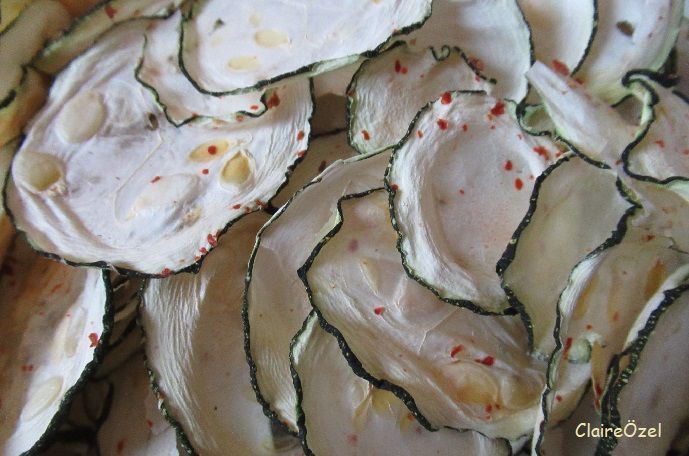 Seed saving season, for next year's crops. Choose the best tomatoes, wash the seeds and dry in the sun. The next task was cutting back suckers at the base of the fruit trees. This should be done every year, so the main tree uses its energy well. One sour cherry had so many suckers 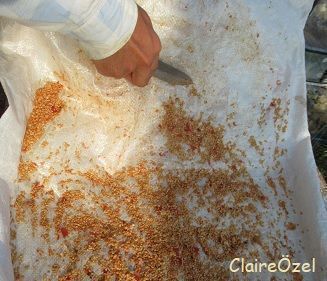 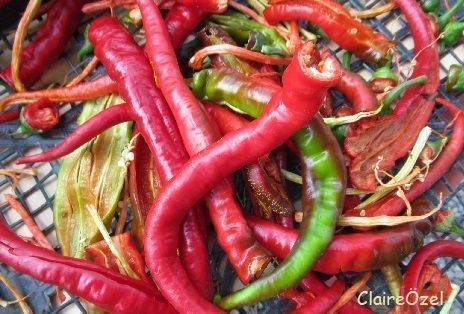 Did you know... During this time of year, shepherds often stay "above", on the mountains. Animals are prioritised, rather than walking back to the barn every evening, then every morning walking all the way to the limited amount of edible plants. In the evening, someone will drive up to where they are with food and drink, and stay over for some tea, before coming back with the dishes to be washed up. I found Fatma at home, facing a pile of washing up, with her burnt finger. I took over and decided to make her a pair of pan holders, to prevent future accidents.