We all worked in the field above the Mandala strawbale building. Weeding, you need to know how hard to pull, which ones are too spiny to touch bare handed (though in time your skin thickens. Yes some of us do prefer working without gloves, getting a better feel and grip.  It's a choice :).  Some must definitely be pulled up by the roots; we develop a technique to get full body weight pulling without hurting one's back or leaving a root deep down... to start growing again, more vigorously! Towards the stream, a combine harvester is at work.  Farmers have queued for their turn.  Before Vahit usta returned to Elmadağ, he had his snack in the shadow of Pillar no.11.  Thanks for the ayran you gave us for our late lunch.

After weeks not visiting friends at Çiftlik (our nearest settlement, just over the ridge to the east), I stopped off. With me I had two bags of books: some for Elif's middle school library (she can read them over the long summer holidays), and another for younger children. 3 year old Kardelen chose one with animals. Books are hard to share, but she did manage when her cousins came, curious to know about everything. A puppet, with an ear piercing squawk soon lost its voice, as it was passed from hand to hand. Silence! Elif was keen to visit Güneşköy: time to leave, over the ridge between the slight peaks separating us. As we reached the top, we could see the machine on the viaduc, probably attaching arms to suport the electric wires to hang from the posts at the edges of the viaduct. Kardelen carried her book for ages, sometimes dipping in to check for an animal "...can I see this bird here?". Pre-school activities matter! Ever since she's worn shoes she's worn them on the wrong feet; she seems to be used to this; what impressed me more was how little she complained about the prickes and spines as we walked through the tall plants that are becoming crisp now that days of intense heat have arrived. When ı was able to check her socks, I found several grass heads firmly lodged in a her tights. 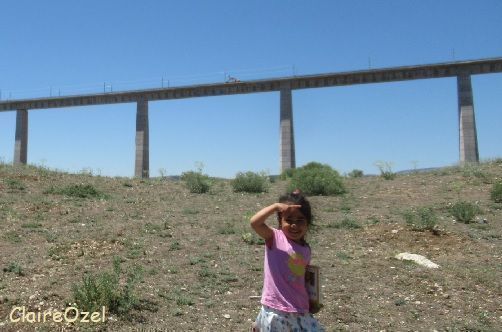 Weeding for ages, we forgot the Kardelen was hungry. Elif had been collecting edibles: çıtlık (Chondrilla juncea, of the family Asteraceae known by a number of common names, including rush skeletonweed, gum succory, devil's grass, and nakedweed) and Chenopodium album (also known as lamb's quarters, melde, goosefoot, wild spinach and fat-hen) and wet off to the kitchen to make a salad and I walked with Kardelen, via the mulberry tree - enough to stave off her hunger. Once in the kitchen, with paper and pencils she set about creating her design and filling it to the point no white remained! The 3.5 year old to her sister "You are my best ever sister!". Along with goosefoot and skeleton weed, Elif's salad had mint, purslane, chard, sorrel, parsley and roket - all from the land. 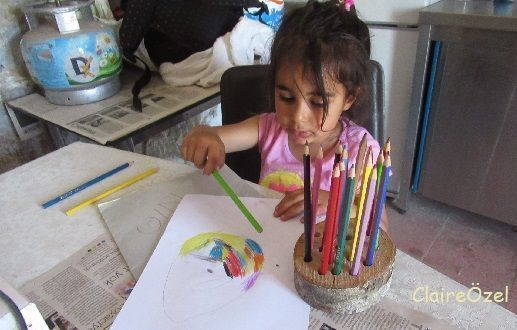 Daucus carota or Artedia squamata - Whatever its name, I've never seen the seeds in this shape, and golden. Could this be due to the recent great rainfalls? 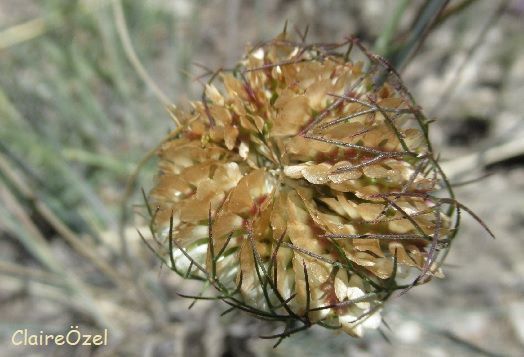 Our Canyon is changing shape. In time the narrow track (dug for pipes that were enver laid, in 2004) cut deep into the land, then started to widen as sides gradually collapsed in time (in places on side crumbling faster, so modelling the inner profile of the Canyon). The recent heavy rains gave rise to several flash floods, some even reaching the fruit trees lower down. When the three of us reached its edge, Elif pointed out we couldn't jump across it ... and set about climbing down into it! Until now I'd discouraged this, telling people to walk to the mouth down below; so long as the willows are safe, this is OK. As we climbed down, a stone rolled, and a nymph was uncovered: what might you grow into, if you survive outside your cool hiding place? Tomorrow is Elif's birthday, turning 11 she's maturing, taking on responsibilites, interested in languages and learning plant names...

Strikingly big and bright; a strong smell (for those who can), this wild onion attracts many. At least 2 visitors are on the photo. 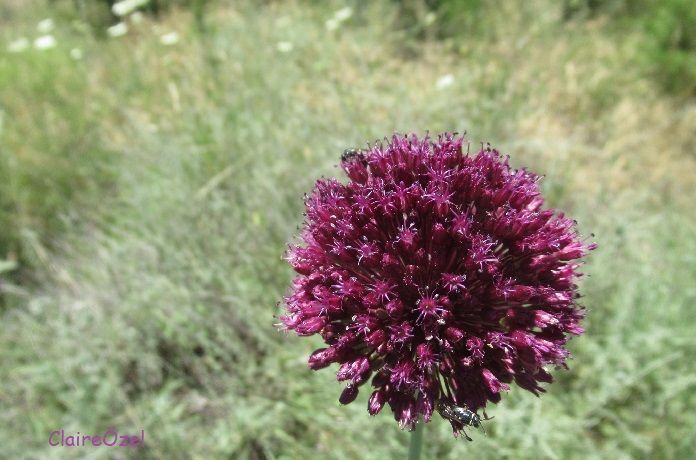 On the way back to Ankara, we stopped by at Zübeyir's to collect the cherries he had picked for İnci to distribute. The bees are getting on with pollen colelction and honey making; to be collected in a few weeks, allowing them to build up more honey, for their own winter reserves. 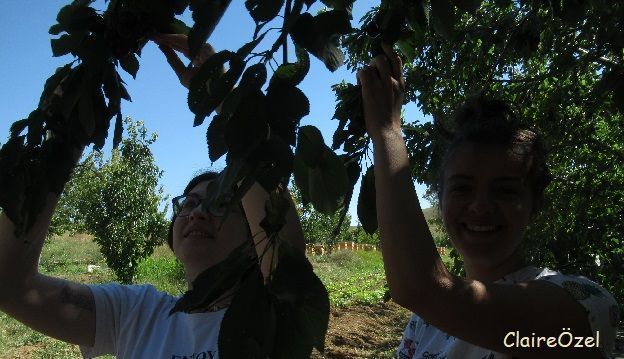 Climbing the posts along the edge of the viaduct? Definitely not for me! These two electricians were enjoying singing and joking loudly in the freedom of the air 100 meters above us as they installed the cables for the high speed train - which should have opened in 2019. The sleepers are still piled up, waiting to be put in place. 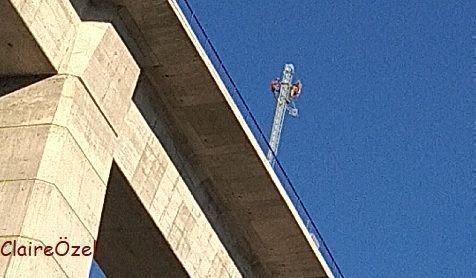 Eid seeds The weather alone is enough
Other Blogs
Blog
We use cookies on our website to support technical features that enhance the user experience. For detailed information click here.
Accept