Nature is abundant this year: more rain than I have ever seen during an Anatolian summer has brought on bumpter crops and jungle thick weeds my hight and more.  The 10 000 tons of rich alluvial soil dumped on us in 2016 came with bits of reeds - enough to start new populations.  Nature wins over one way or another. 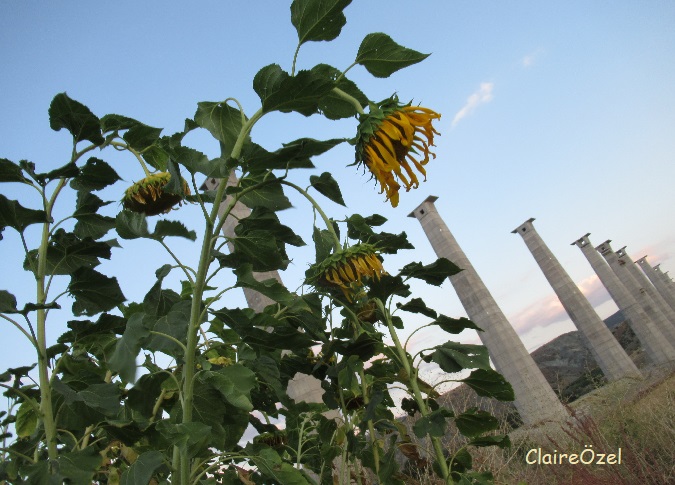 Thumped on the head by a giant sunflower! The summer steppe flora is now crisp faun, in colours ranging from pale beige to yellows and browns.  The Turkish for "steppe" bozkır reflects a colour that is hard to translate: Grey- Dun- Sienna - Having white and dark hairs mixed- Muddled- Light colour mottled with black or brown...  One of those words that carries meaning within the context of that specific language.

I wandered on the slopes in search for sturdy plants that still flower (20 at most, with extreme survival strategies.  Roots reaching down over 2, 3 or even 4 meters to patches of humidity unaffected by evaporation. Borages survive with a fine duvet of hardened spines, except on the flowers themselves).  **  No way could anyone venture there in sandals; seeds of all shapes and sizes are looking to hitch a ride away from their parent.  Sports shoes with good grip; laces will work loose with the friction, but tying them up again may leave tiny spines in your finger tips!  In time your feet get used to most of the small pricks, though some do demand immediate attention!  **  Do not tuck your trousers into your socks - they will pick up so many seeds, you may never remove them all.  Thin cotton trousers, woven not knitted, will require least prickle removal at the end of the day.  Not tracksuits!  They are like the soft part of Velcro, soaking up the slightest prickle. **  Loose Tshirts are obvious in the summer, though wild carrot seeds will always find a way of clinging on.  Light colours are best: unwanted visitors can easily be spotted.

Viewed from the highest point, Rüzgar Tepe (Wind Hill), how the landscape has changed since 2002! The 16 year old fence still stands, keeping out goats and other domestic animals.  A number of juniper trees are now growing on the high slopes, some only starting out, a couple over 1.5m tall.  In low light, the silhouette of the wild jasmine fruits stands out; without spines or other defences, these used to only grow inside the visciously protective Jerusalem thorn.  Goat-free, they are moving out to independence, less competition for nutrients and more light.  Down below, along the dusty road, no trees remain along the water channel dry for months.  The Balaban "river" no longer flows, with pools of stagnant water where animals gather.

As dusk falls and colours fade to grey on grey shapes, sounds come to the fore; as well as animal calls, and the bells of a returning flock, the wind livens the landscape: Various sounds of rustling - deeper coarse base from maize leaves whereas the rust coloured fruits of the Jerusalem thorn tinkle in the breeze. 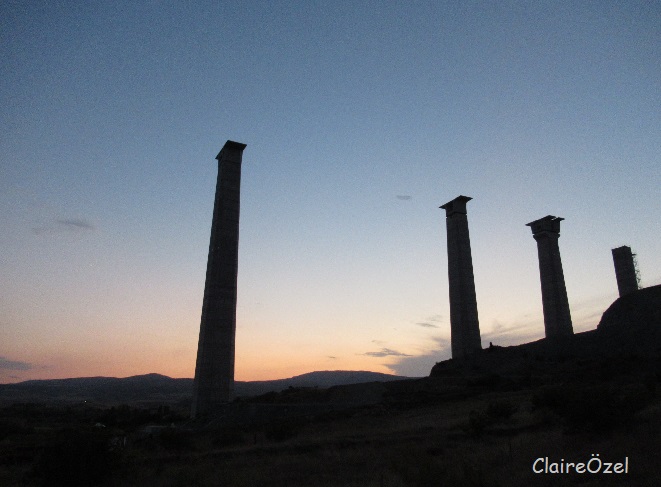 How to take photos of bats flying? so agile... whisking up, left, away, constantly changing their path in the dim light.  Walking with limited sight, each step is tentative, unsure when I will hit firm ground.  Only major shapes have outlines. Eventually back on the path, between the fruit trees and the chicken enclosure, I can walk more confidently.

Of the 24 pillars of the 10th viaduct of this section of the Ankara Sivas high speed train, only the 7th is still "earless".  Completion date is 12 months away - work on the horizontal "tabliye" will begin when the MSS90 (movable scaffolding system) finishes Viaduct 7.  How will the current economic crisis affect the project, resources hammered by US tariff increases, as well as the drastic drop... No!  Rise in value of the USD.  Diplomacy matters!

10pm: Celal does the last watering before bed (a very good soak, to last the long Eid break), I walk down to the Mandala building. The half moon shines bright in the dry central Anatolian air. The track is visible, only the brightest stars twinkle, w,th Venus brightin the west and pinky orange Mars rising in the east.  Lying on the bench under the small apricot tree, I spot a couple of shooting starts.  Last year, before benches were donated, we had to take a thick sheet to lie on.  In a year from now, the skyline will be scored by the bridge, and the tree a little bigger.  New solutions to be sought...

Up at 6 for the first rays of the new day, behind the Mandala strawbale building.  The mega-gnomons' longest western shadows fall parallel to the Balaban. 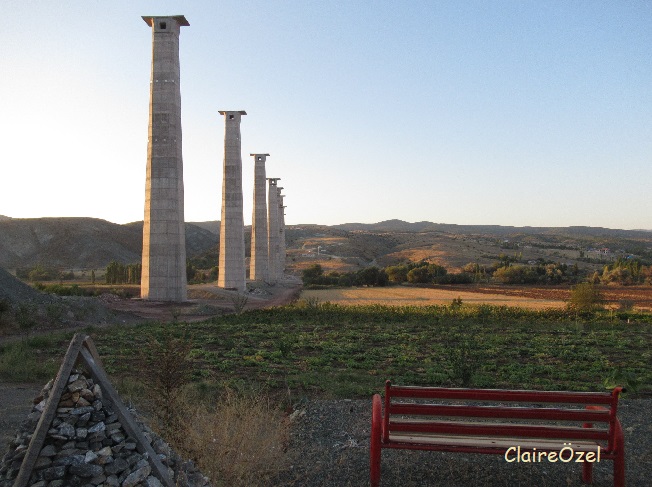 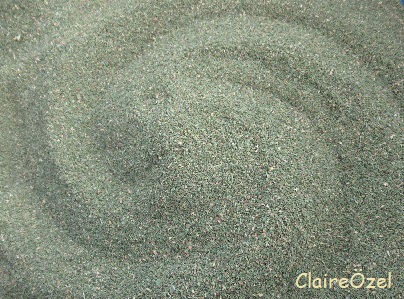 What better for a 60th birthday than seeds? Celal and I sifted parsley, then celery seeds - so much we can use it as a spice. But is it a culturally interesting flavour? In Turkey, it is mainly the celery version with a bulbous root, celeriac, whereas in Cyprus, celery is eaten in all forms; could this be British influence?!

Anyone who want to try celery seed as a condiment, get in touch!

Sunday, the team arrives by 8 - early start to avoid any Eid Bayram traffic. Immediate organisation - some off to pick, others wash the jars and prepare the pickling mix. 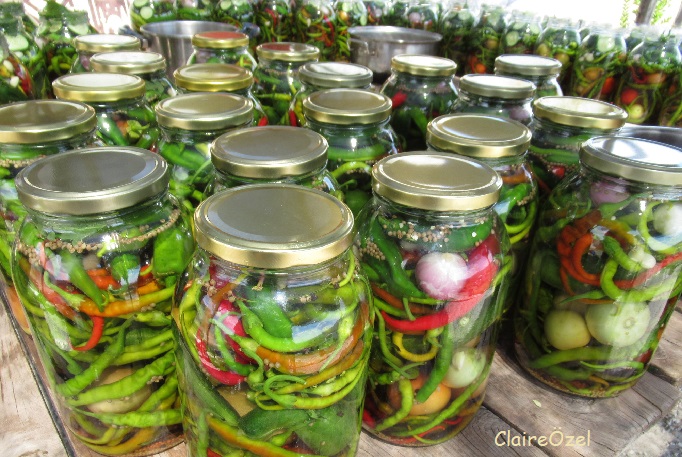 Once all the jars are packed, spiced and sealed, the remaining mound of peppers is strung up for drying - like festive decorations. 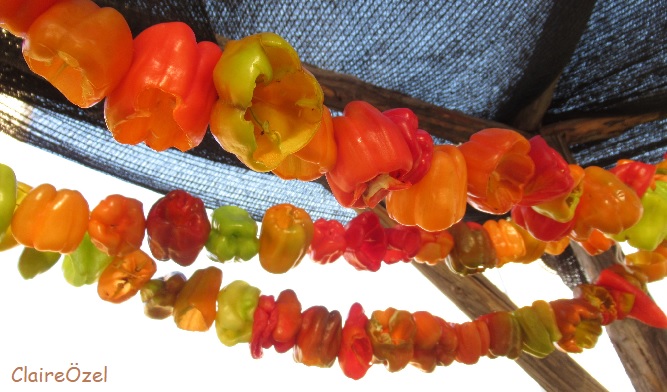 Saturday, driving alone I visited Hisarköy village for the first time in ages: Eid holidays are wonderful excuses for this. Since the viaduct construction, we have rarely seen our old neighbours Ekrem dayı and Saadet teyze. I knew they live on the top street (of 4; this village was relocated in 1970 on a grid pattern, after rocks were rolling uncomfortably close to the old settlement - around 2000 years old). In the middle of the afternoon, few people were about to ask: selling at Elmadağ market, in the fields or out with cows or sheep on the hills. Emanet recognised me: her grandson had been a METU student. Still looking for work after 4 years... Are people now overqualified for the available work, or might other less pleasant factors be at play? Returning on Sunday, I dropped by at Çiftlik Mahallesi, our closest neighbours. The day before Eid Eve, many have gathered. This year is special as Rukiye gets ready for her wedding in 3 weeks. I haven't seen Adeviye for more than 10 years; here she is with several grandchildren. A quick Merhaba from Elif before she joins cousins on the swings: rope hanging from a branch, with a cushion thrown over it. No one is on phones or tablets :) My first solo night drive - I owe much of my driving competence to Güneşköy! 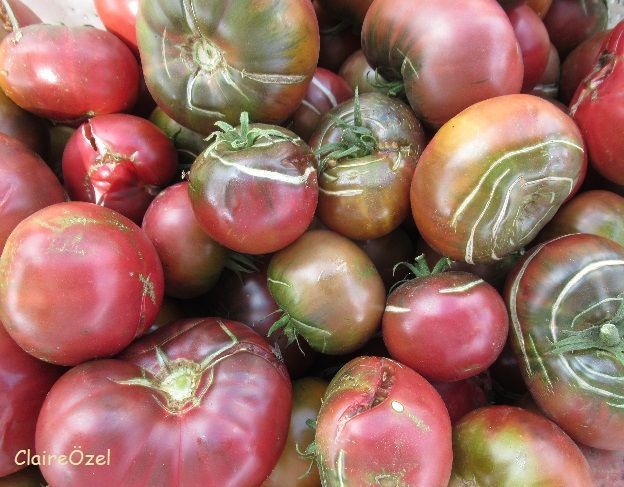 Looking Forward
Other Blogs
Blog
We use cookies on our website to support technical features that enhance the user experience. For detailed information click here.
Accept