As the days start to warm up, in the middle of Ramadan we came for another visit with Doğukan, and a first for Barış. Our closest neighbours were nowhere to be seen: when fasting energy becomes more precious.  The holes in the dirt road that used to become small ponds and challenge low lying traffic have been filled with gravel; thanks to whoever organised this.

Arriving at the glasshouse (Sera), we met Ahmet, the new caretaker - with no gardening skills.  Then we got down to work: cleaning the pond, noting wild flowers, showing Barış round, foraging for edible plants, preparing the evening meal, watering trees planted in the canyon, and checking out vegetation growing under the viaduct.

It's been 5 months since I last stayed at Güneşköy: Doğukan was there.  Today again he is with me, full of energy and motivations.  Every time you come, you never know what you will experience, or when the next visit will be. This stay we had much quality time, focusing on the moment 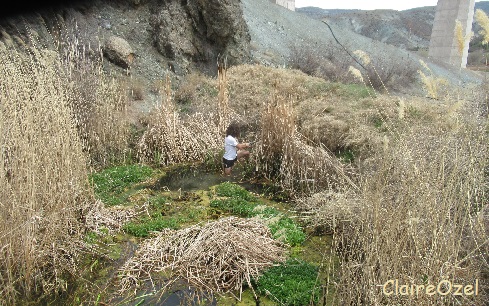 Around the pond, plant life has flourished, both in kind and in mass.  Doğukan got his shorts on and waded in.  How to maintain ecological balance while clearing the pond?

Floating islands of reeds, algae and now growing on them Rosebay Willowherb (Chamerion angustifolium or Epilobium angustifolium). Doğukan waded in the pull as much as he could to the side, then fling the masses onto the steep sides. Reeds (called Kamış, or in some parts of Turkey "kargı") have very sharp cutting leaves! Little fingers might bled a lot, but the cut doesn't really affect movements - an injured index finger would have been more irritating. 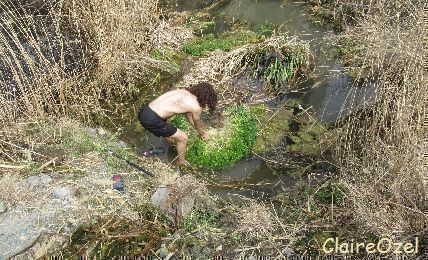 Meanwhile, around the edges Barış was setting fire to the dead reads. Though this is a rapid solutions, how will this turn out in the long term? might it in fact stimulate stonger growth? Clearing near the rock, Barış stepped back as a long snake slipped away "at learst one meter long!". One like we'd seen early June 2018. At least, in the evening I checked the frogs were still happily croacking away, unaffected by our clearing actions. 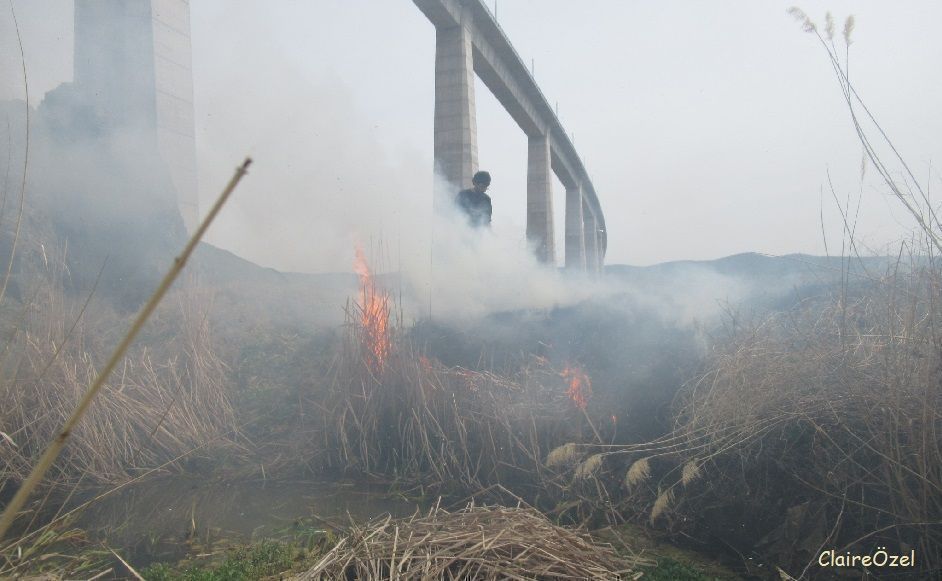 The edges of the pond have been well colonised by reeds, with thick roots deeply anchored and stretching out far... 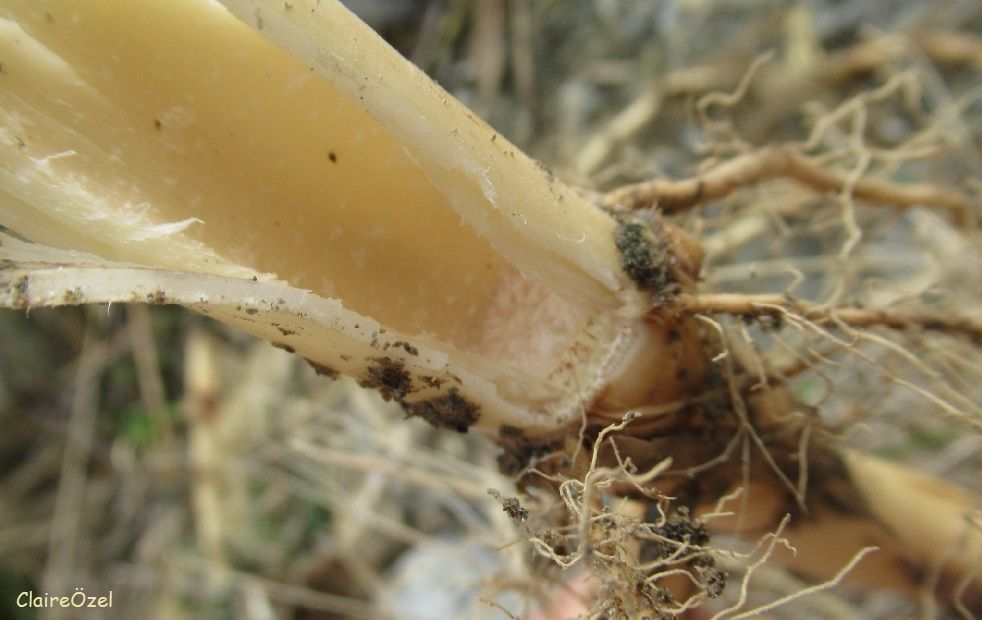 and the inside is edible! Crisp and sweet. Years ago in Peru, on Lake Titicaca's floating islands we were offered a taste. There, the reeds were also used to make houses, boats, islands and probably other things. 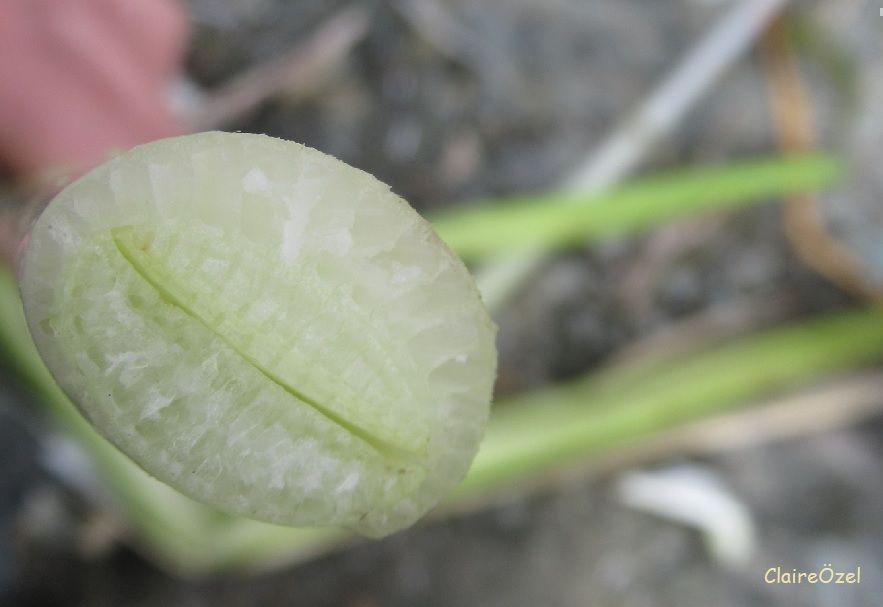 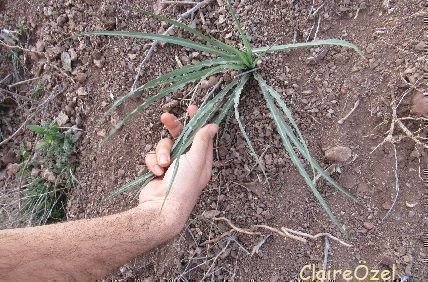 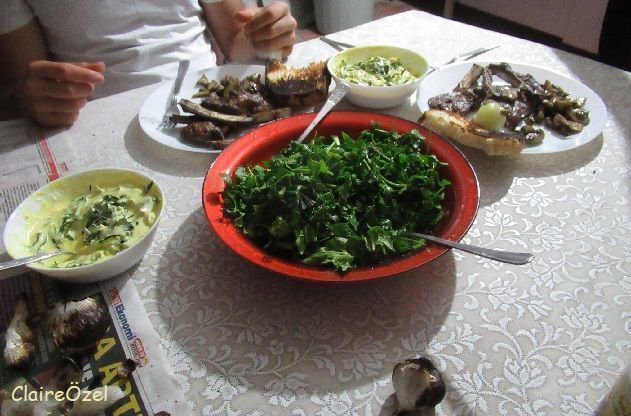 In the middle of the month of Ramazan, the full moon shines bright through the night! Its light highlights the first half of the new posts for electric lines (aren't then encased alonog the lines? what else could these posts be for?); those from the 12th pillar onwards will soon be in place, the viaduct taking on its newer profile. How much more will it evolve before the first train passes over it? We'll not notice the concrete sleepers when they are laid... In the moonlight, I climbed to the pond, with my mandolin. The frog choir was in "full throat" (the archaic "throttle" meant throat), the frogs unaffected by today's clearance. They always do go silent for a while when someone comes near the pond. However when I started to play they were struck dumb. Absolute silent for ages, then I got cold and left. Did they stop croacking to listen? Were they frightened? Not that I think they were in awe of my playing. My guess is that in the dark of night, their key interaction is by sound. The unprecedented mandolin sounds might have seriously disrupted their communication channels.   The long winter freeze is finally giving way to warmer days, and even at night we no longer need the stove for warmth in the Sera kitchen. In bed only 3 layers are enough, just the winter quilt without the sleeping bag. Good to have the freedpm to move, not cocooned in the narrow tube of the bag! At 5 am as the full moon was setting, Venus was rising. The Sera wasn't cold. 5.52 the first sparrow chirp breaks the silence, distracting my train of thought, pushing me off balance as it brings me back to the reality of a new day! How I enjoy the deep silences of nights at Güneşköy, my mind floating in peaceful emptiness. 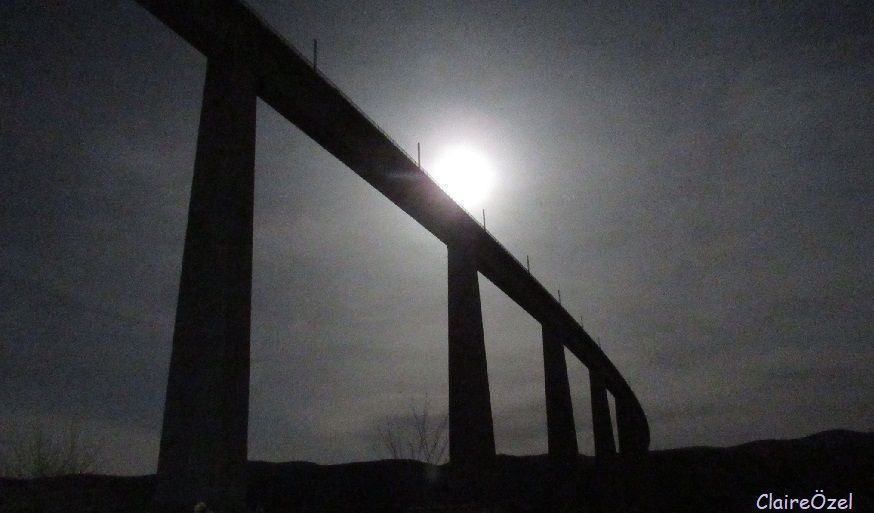 Exactly 6 am, the sound of a door at the other end of the Sera! Just the time when, in the old days, when Celal was at Güneşköy, he would rise to put the kettle on and start the day. How much we shared... even without talking, just being there; no words needed as we were tuned in to the rhythms set by nature. Now you've moved on to a slower life, recovering after heart surgery with your family. Today Doğukan is getting up. The morning is now cold, until the sun warms the night-cooled earth, faster if there were no clouds. We decide to go for a walk on the hills before breakfast, and Herkül joins us. Beyond Çeker Tepe (where there is phone and internet reception), freshly ploughed rich brown fields had appeared under what looked like poor barren soil. Under the viaduct, what is growing in the soil used to fill the spaces left after construction? These are pioneers, which should be monitored... Some of the seeds I planted in the last 2 years are coming up: several plums. Herkül... I'm so glad you came for this morning walk; little did we know that this would be out last time together. 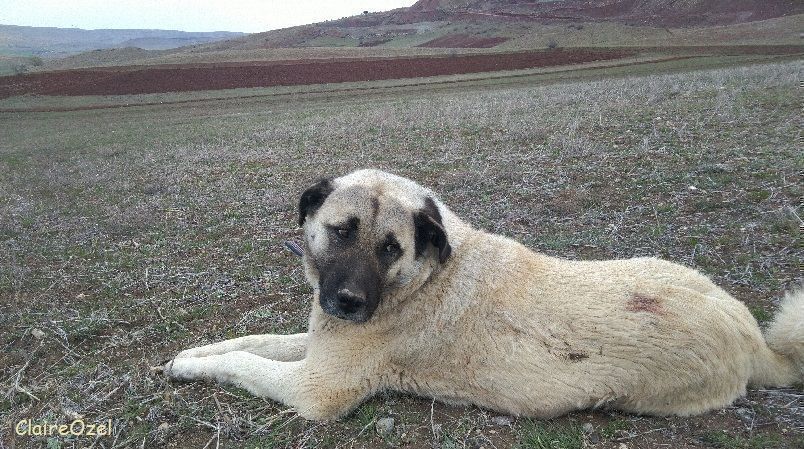 One of the "waste" items of the moment are the pods of the false "Acacia" (Robinia pseudoacacia, commonly known in its native territory as black locust,). The dark mat outsides contrast with the shiny silvery silky inner surfaces, where seeds have each left the hollow it grew in. After becoming over-stretched, a spiral I made over 2 years ago needed reversing: it resisted at first , then it started to take shape . On a different issue: 400TL of petrol only fills half a tank... 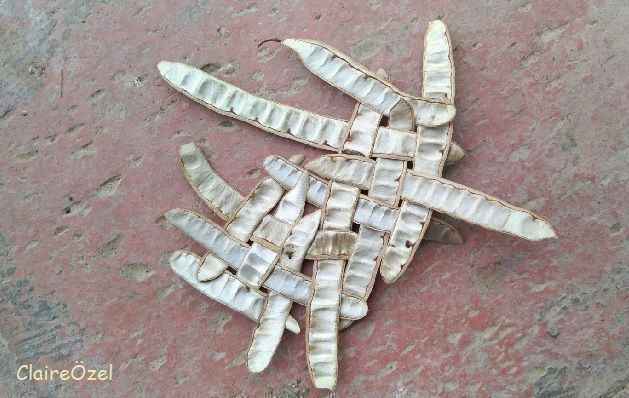