Theresa, author of Güneşköy's first MSc thesis, is here for !  She first visited in 2007, and kept coming back.  In 2012, she submitted her Master's dissertation to the Sociology Department of Vienna University. Now living back in her village in Northern Austria, her children speak more German than Turkish, though they comfortably switch between the two. Rather than being in an apartment in Ankara, they wanted to be outside and camping.  The night before I'd called Elif; could she be ready at Çiftlik at 8am?  We left Ankara at 6.30... 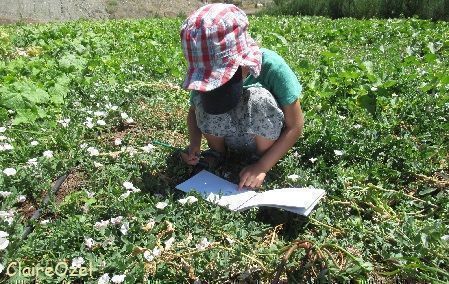 Among rampant plants of cucumber and Cucumis melo var. flexuosus (which Wikipedia tells me is called Armenian cucumber in English), we looked carefully to see what was there.  First what not to tread on (not just leaves but especially the shoots: if damaged, the plant will take a couple of weeks to recover and start growing), and then which other plants we could see.  A few minutes of observation, then 6 year old Atlas opened his bag and took out his notebook and pencil: recording time!

Kids learn from each other. Elif, who's never been expected to record in this way, watched Atlas, then opened her bag, took out her pen and notebook ... and created herself a table to draw on. 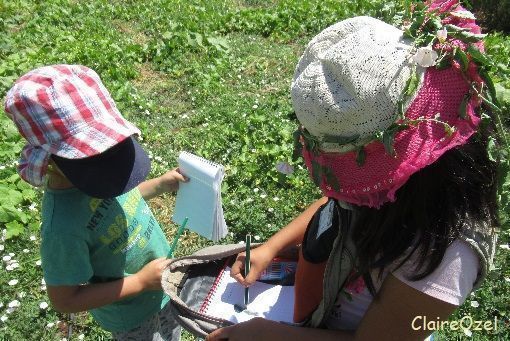 The salad team preparing their part of lunch: everyone is using a knife. Children growing up in Austria are taught to use tools and understand both risks and responsibility from a young age. 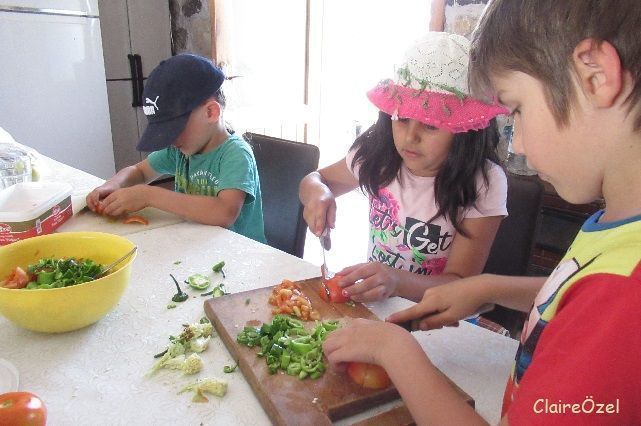 Physics in the kitchen: How well can you clean the table cloth without detergent? Simply leaving the damp sponge in place for a minute is enough to loosen much of the grime, which then lifts off easily.

Heating the washing up water on the solar stove.

Atlas had found a short iron bar with rough edges and eventually worked out what he could do with it: removing te bark of a thin branch I'd pruned at least a year ago. No one paid much attention, stepping over him as he studiously rubbed away the hardened bark. Then he jumped up and exclaimed "It smells of oats!". Yes, this old dried out piece of wood did smell of oats! 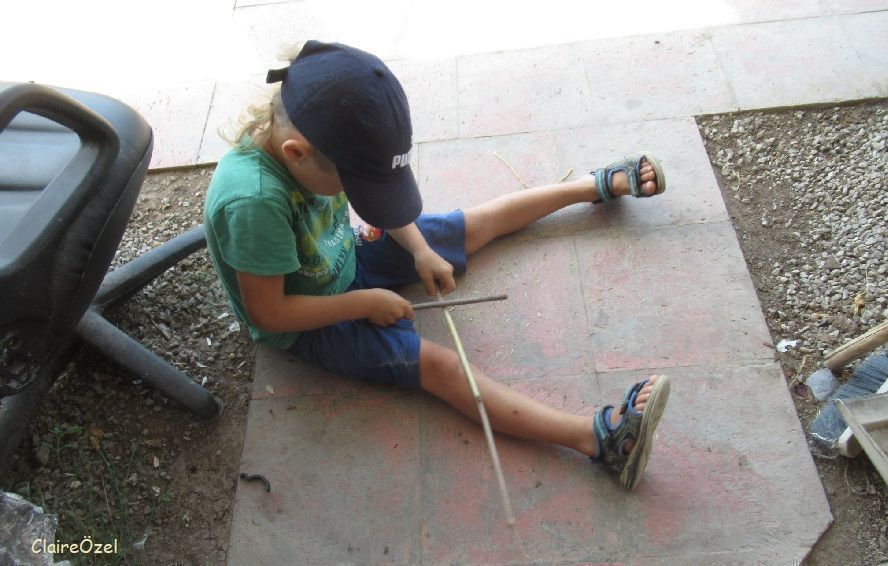 Time to make Seed Balls, so they can dry out in the hot weather. A handful of dry seeds collected over the last months from Güneşköy's wild flowers, some vermicompost, and a good dose of clay. Mix well and add water until the right texture, then start rolling. 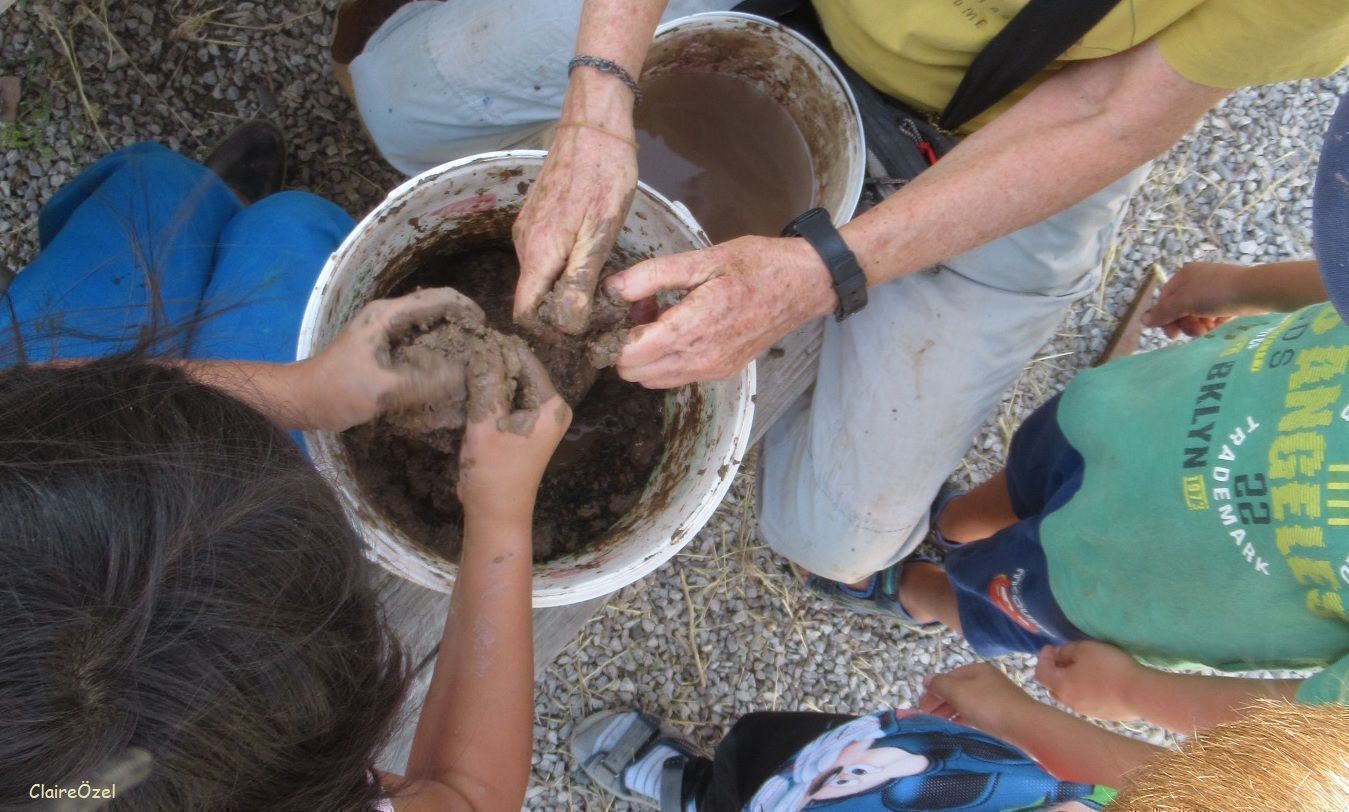 Lucas designed a solar cooker - sun baked stones transfering their heat to the humid balls in the box. 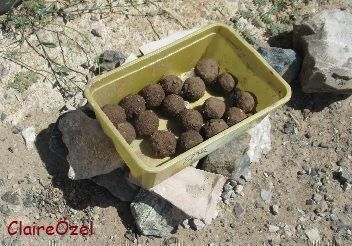 Before everyone got too tired, I got out the game I call Winch. The 5 blocks can only be picked up through the combined effort and attention of all participants, each holding a loop at the end of their string. It's best done on a smooth surface, but there wasn't enough space inside. We'd managed to pile three on top of each other, then when we lifted the fourth into place, the tower toppled over. Next time Atlas should better understand how to contribute to the teamwork! 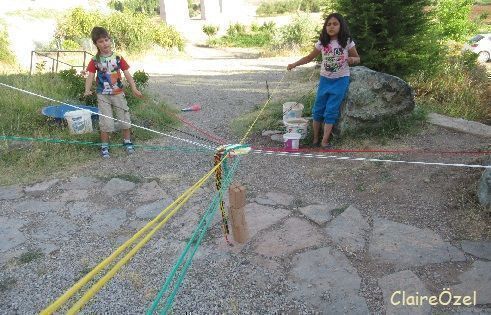 The pleasure of sleeping under canvas does require a clement temperature - not too cold, not too hot. August 2021 is hot! 8.30 am, the children were still sleeping in the tent. Theresa and I sat on the bench next to KeşifPoint and it was getting really hot; the shadow of the 9th pillar was about to move over us, bringing some welcome cool. 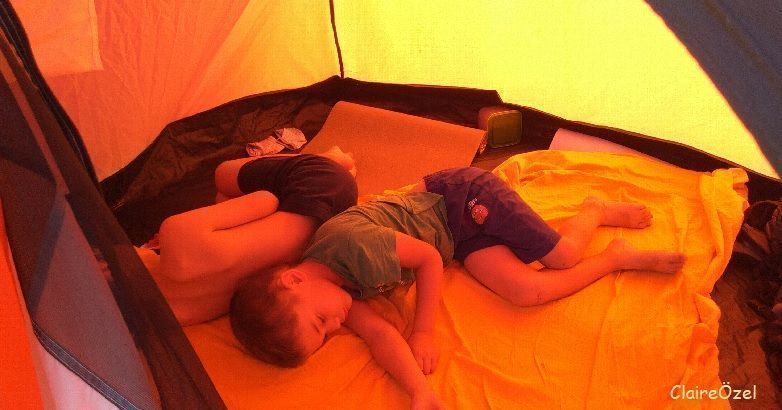 The dome is still waiting for its cover. As soon as Atlas saw the structure, he was reminded of a climbing frame back home in Austria! Though Theresa told him it was NOT a climbing frame, he was already scaling upwards... He carried on up until he was near the rounded top when he froze, unsure and feeling unsafe; "Hilfe"! Theresa came below him and calmly told him he'd got up there, so he could also get down. "Stretch your foot backwards till you find the bar..." and soon he was down again, running off somewhere else. Theresa was the guide, allowing him to discover his strengths, and what to do when reaching his limits; he can find his own solutions, assess risks and get himself out of challenging situations. 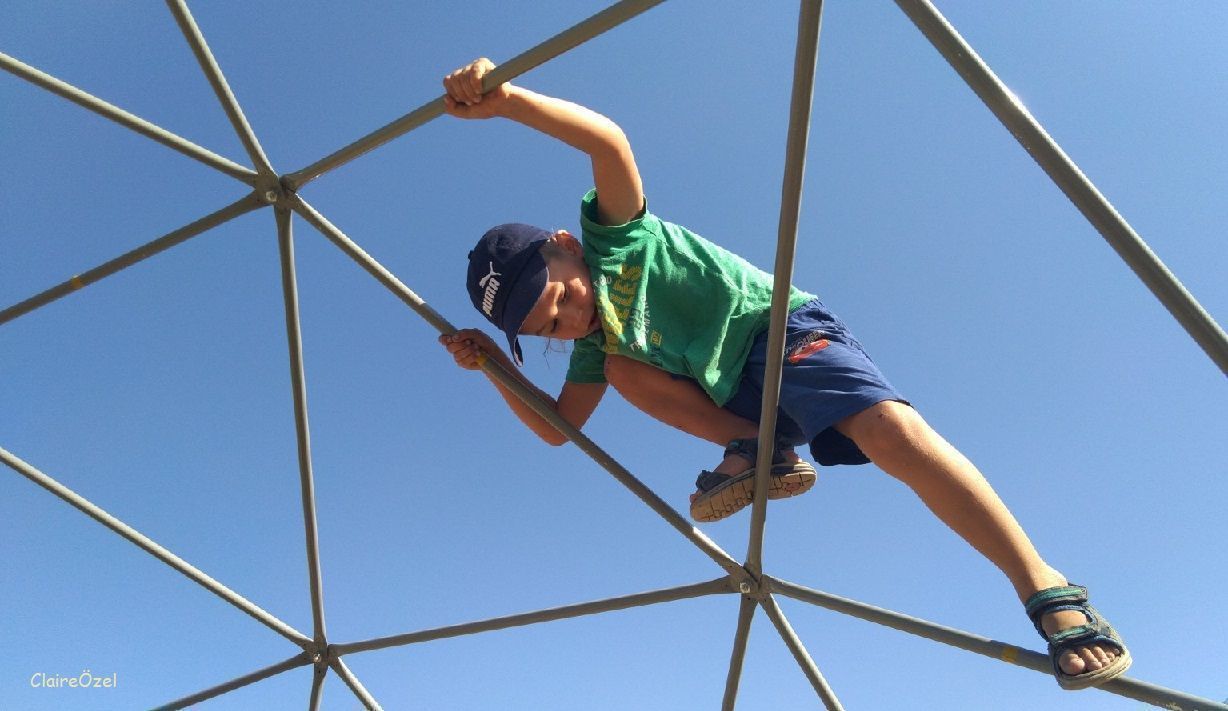 Evening, time to let Herkül loose. He doesn't realise he's such a big dog and might scale children he wants to play with. 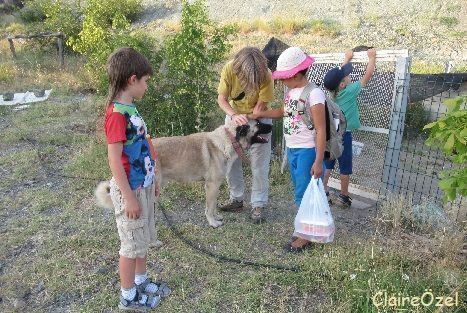 In the evening, we visited Seda - Theresa and I used to stay with her years ago. Theresa had never seen Seda's new home. They'd prepared a meal for us, sitting around the "sofra" on the floor - except for Seda on the settee (2 weeks since her back operation, with platinum inserts. It had been due 16th March 2020 - one of the first COVID cancellations. She had to endure 15 more months of back pain). Rukiye is caring for her, assisted by young Ecrin: nearly 2, she's a very entertaining individual! Tahir too is with us, happily helping with tasks, under Ecrin's inflence. Seda wanted to see Lukas' drawings... 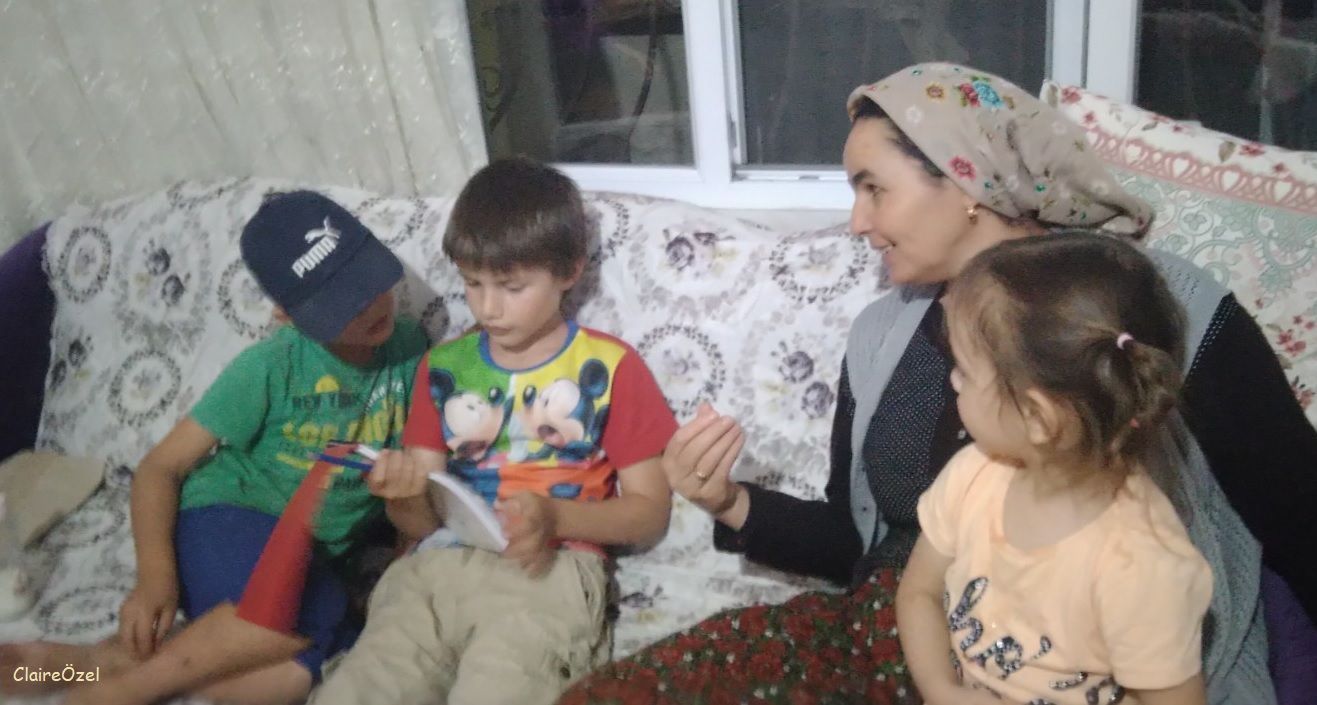 ...and then Tahir invited Lukas to draw some of his bells. I never knew he had a collection of "takım", the name for these particular bells: different sizes, different shapes each with their own name, and all sith different sounds; I should have recorded when we all were shaking different bells in this bedroom: the jangling of a flock roaming on the hills. Tahir's collection includes the collars as well as the bells. One is unfinished: made from half a perimeter of a slice of oak, it is shaped into a hoop, with a simple but clever locking mechanism. A design product of generations of experience, using local materials to address needs. Someone who silently draws can open up mnds and opportunities; Lukas, enjoy drawing! 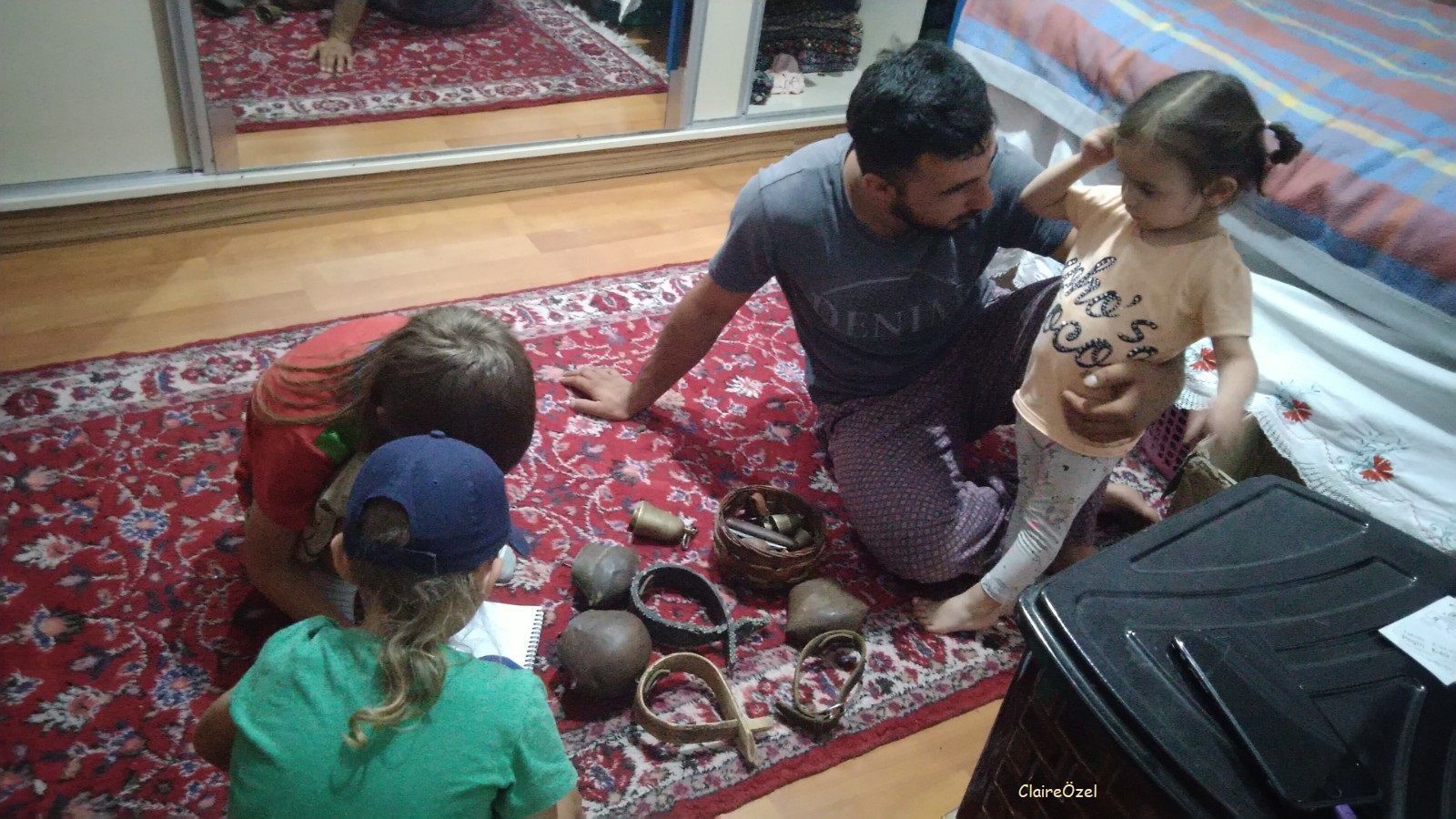 These creeping thistles (Cirsium arvensis, in Turkish Köygöçüren: the one that makes the village migrate) is still flowering, and spreading seeds for future generations... Its nectar attracts insects, of which this Pontia daplidice, the Bath white. Look closely and you'll see why I could get close enough to take the photo: it has a chunk missing from its wing. With the children we watched ant trails: they travel in both directions, so how do you know which direction their nest is in? Notice what they are carrying. Those carrying seeds are going home. The seed husks are then taken out to their dump, away from their nest; these are then sources of life, shelter, or more for other creatures. As we watched, the surface of the heap quivered, shook and a large black beetle emerged! As I was picking it up to she the boys... OWW! a tiny ant had nipped/stung my foot! I was on their territory, "You too are good to eat" laughed Lukas! 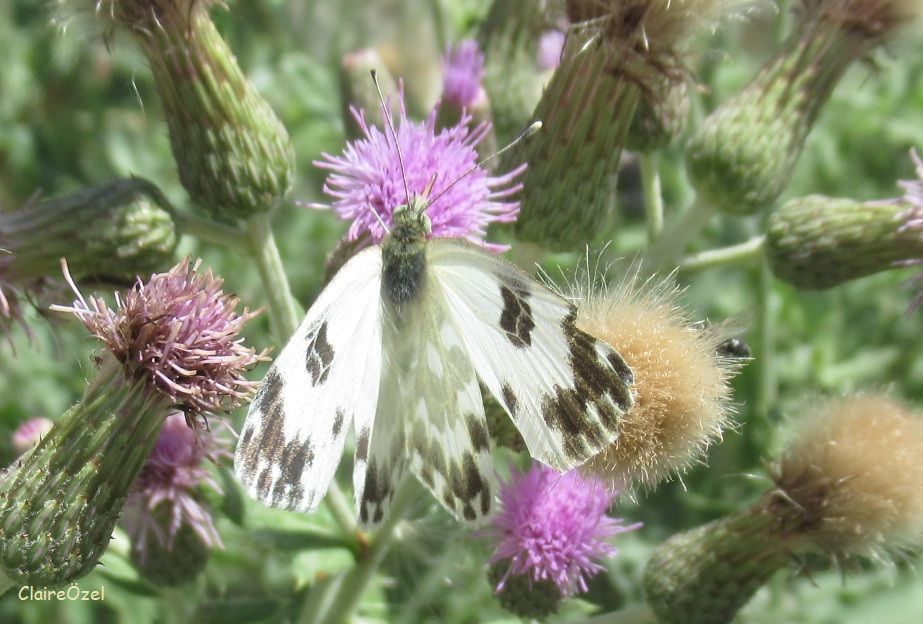 In the centre of Hisarköy (the nearest village, established in 1970 when rockfalls were threatening people and buildings in the late 1960s), a stork nest is built on the tallest pillon. Their offspring (it seems far to big to be called a chick! 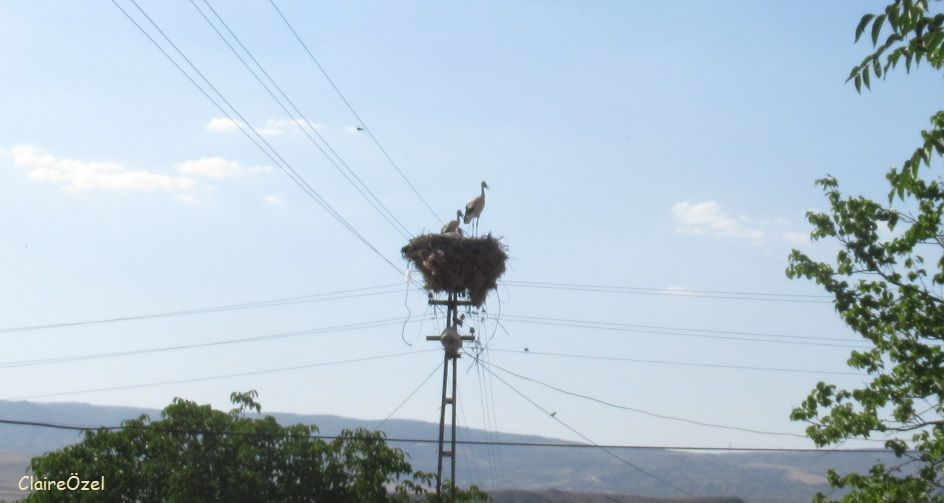 When Theresa first came to Güneşköy, we used to stay with different families in the village of Hisarköy. We also got to know Ekrem Dayı (Ekrem uncle) and Saadet Teyzeyle (aunt), as they farmed the land below Güneşköy, next to the stream. When Ekrem Dayı died last month, Ali, Inci and I visited Saadet Teyze; condelences here are taken seriously. Anyone who has had any connection will come and spend time with the family, with the traditional Eau de Cologne and Turkish delight being handed out. That day, as I sat with a distraught Saadet, I texted Theresa - her family were on their way from Austria. When I told Saadet, she cheered up at the idea that she might be able to see her. I promised I'd bring her... hoping that I'd be able to arrange this. Today, before leaving the Balaban Valley, we dropped by. The first photos were sad, with emotion welling up. Then we drifted back to memories of good times shared over the years: these beaming smiles will take us into the future; Ekrem would have wanted this. 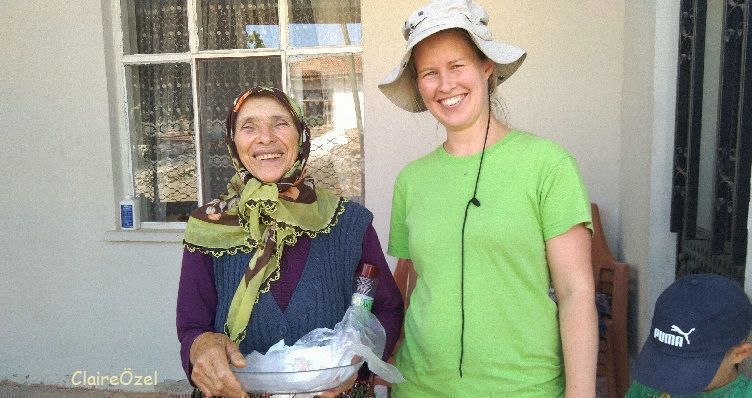 Theresa, being here with your children reconnects me with the way to sense what is needed, simply by slowing dowing and just being there to watch what the children bring to our attention. What will there be for your next visit? "We wait with four eys!"

Visitors from far away One long day
Other Blogs
Blog
We use cookies on our website to support technical features that enhance the user experience. For detailed information click here.
Accept