Opening up a path
Another 16 weeks to go before the end of the semester, so only weekend visits for over 3 months.  5 of us set off, getting fuel (for the rotary cultivator) and gas (for cooking) on the way.  Celal was thrilled to see us, especially those who hadn't been for a few months.  Our new visitor being from Diyarbakır, Celal was able to talk in his mother tongue; people blossom when they are in their element.

Nothing that we absolutely had to do today.  While two helped Celal with the compost heaps as he ploughed the 3rd terrasse in preparation for sowing seeds, three of us went over to the chickens: time for a full clean out!  The top hen house is so muc easier to clean now that we changed the planks: wider spaced and thinner, very few manage to soil their perch!  In the lowest hen house, Halime, our little red hen, had taken refuge.  Being the smallest of the 100 chickens, she prefers to be away from the crowdso.  A pot of grain for her to dig into away from the others, my cleaning the planks towards her... and eventually she trusted me enough to be stroked. Any advice from any chicken spychologists?

Life is stirring: the chickens are giving more eggs (16 today).  Wild flowers are not only 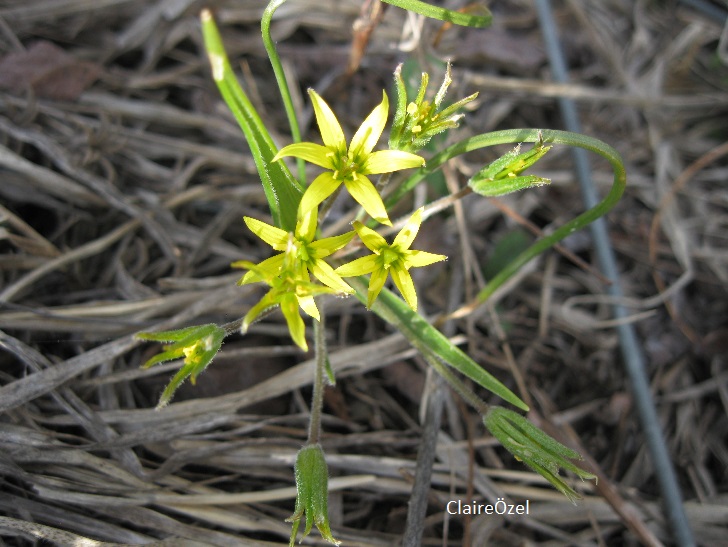 Colchicum and Crocus : the first few Gagea villosa (Lily family) have appeared on the western slope.  Birds are singing - larks and owls have such distinctive calls. Nest making is sometimes in inappropriate places - picking out the cladding in our glass house: no eggs yet, so sorry you'll need to start again.  İnsects are fluttering around outside, and spiders spinning webs.   At the top of the western peak, a smooth white shape: not a mushroom.  A reptile egg most probably.  A rabbit shot up the hill as I entered the spiny protection of the Jerusalem thorns.

Meanwhile the railway viaduct construction is progressing. Of legs 9-10-11 of the 10th viaduct, the 11th is now complete.  Last week the scaffolding stairs came down; this week the crane itself came down - a bit of a critical moment when the long boom swung down rather close to our straw bale Mandala meeting room!  As it came to rest over the garden, a tree was nearly crushed; the technical experts lifted the tons of metal and inserted additional supports.

The Jerusalem thorn: Paliurus spina-christi (no wild guesses as to its use jsut under 2000 years ago) is one of the few large species that we found on the land in 2002.  "karaçalı"  - the Turkish means black bush - grows wild and strong, with effective anti-nibbling protection.  While one source claims it protects against black magic, the spines are finely viscious: how can anyone wear such a weapon? every couple of centimeters, a strong spine points directly forwards-up.  Just underneath it, a smaller curved spine catches anything that has been unwise enough to penetrate beyond the outer branches.  Except for some well prepared animals: at ground level, there are paths where tortoises have trodden their way to a safe space, surrounded by a defensive spines.  From the flattened grass, larger animals also retreat here.

Two years ago, a number of bushes were cleared when the pond area was dug out.  Since then, we've been too busy elsewhere and the bushes have started to lock into each other.  To be able to reach behind the pond, a path needs to be cleared.  Last week I opened up the easiest parts... Today I tackled the thickest section, well frequented by animals and water: the path follows one of the small trenches where water from the hills above slows down after good rains.